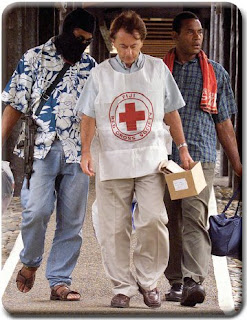 Annie Goldson's new film on Fiji's coup number three and imprisoned frontman George Speight premieres next weekend during the World Cinema Showcase in Auckland. It will be watched with interest. Associate Professor Goldson, from the University of Auckland’s Department of Film, Television and Media Studies, has produced a feature-length documentary, An Island Calling, which traces the 2001 killings in Suva of Fiji Red Cross director-general John Scott and his partner Greg Scrivener. Goldson's media release says:
"The murder of this openly gay couple is still clouded in rumour and political mystery. Scott, a fourth-generation, Fiji-born European, was the repatriated prodigal son of a powerful colonial family. As the Director-General of the Fiji Red Cross, he had gained international attention during the coup of 2000 when he went to the assistance of hostages trapped in Parliament for 56 days. Guided by John Scott’s brother, Owen, the film features friends of the couple, lawyers, Fijian gay activists, and seasoned Fiji observers. The film also includes interviews with the family of 22-year-old Apete Kaisau, who was ultimately charged with the killings."
Bill Gosden, director of the NZ Film Festival Trust, which organises the World Cinema, describes the film as "excellent and level-headed". He sees the film as placing this tragedy within Fiji’s volatile heritage of colonial privilege, evangelical Christianity, immigrant work force and indigenous entitlement.
Shortly after the festival release, a shorter (44-minute) broadcast version of the film, entitled Murder in the Pacific, will air on New Zealand’s TV3 and Australia’s SBS-TV.
Pictured: Speight's gunmen "escort" Fiji Red Cross director-general John Scott from Fiji's Parliament building in 2000.
Posted by café pacific at 9:52 PM