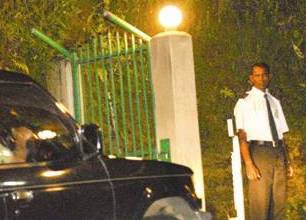 "IT'S WAR", declared the Fiji Times in its melodramatic Christmas Eve response to the tit-for-tat mutual diplomat expulsions with New Zealand. The new blow to relations between the two countries was an irony given that barely 24 hours earlier the media was welcoming an apparent warming up and the threat against acting NZ High Commissioner Caroline McDonald seemed to have dropped onto the back burner. But fed up with Australia and New Zealand's alleged "bully boy" tactics, the regime gave McDonald her marching orders yesterday and NZ retaliated a couple of hours later by expelling her Fiji counterpart in Wellington, Ponsami Chetty. Both were given a week to leave. Writes Mary Rauto:

Like the case with Michael Green [expelled last year], the interim government gave no reason for the expulsion, especially when the decision came a day after interim Attorney-General Aiyaz Sayed-Khaiyum called for reconciliation and better dialogue with Fiji's neighbours — Australia and New Zealand.
Mr Sayed-Khaiyum denied that the expulsion had anything to do with the travel ban imposed on members of the interim government, the military and their family members.
In the last few weeks, the interim government has attacked New Zealand for refusing to allow three people –– the children of military officers and interim government appointees –– to enter the country on sports and study leave.
One of the victims was George Nacewa, son of Rupeni Nacewa, the secretary to the President.

The expulsion order on McDonald followed further accusations by the regime of Australian and NZ diplomats meddling in Fiji politics and spying. One of the interesting stories in the lead-up to the twin expulsions, was Vernon Small's account of NZ Foreign Minister Murray McCully's staged leak with selected journos. "McCulliavelli's" ploy backfired when TVNZ's Barbara Dreaver was detained last week and sent packing back to New Zealand. Pictured: Fiji Times image taken outside McDonald's home in Suva.

Meanwhile, back to the festive season. Café Pacific wishes readers and followers a Hepi Krismas and fruitful 2009! Check out Pacific Media Centre during the break.

Posted by café pacific at 1:16 PM No comments: Links to this post

Finally a review for the Fiji Media Council - but will it do the job?

HARD on the heels of the Fiji regime's latest PR debacle this week by kicking out one of the finest Pacific journos - TVNZ's Barbara Dreaver (pictured) - a review of the Media Council is finally officially on the table. This is something that has been drastically needed for some time to restore some balance into the Fiji media landscape - and to help blunt the regime's continued assault on media freedom. The $10,000 Ausaid-funded exercise will have a reasonable three-member team on the job. Australian Press Council executive secretary Jack Herman, lawyer and former Fiji Electoral and Boundaries Commissioner Barrie Sweetman and the chairperson of the Pacific Centre for Public Integrity, Suliana Siwatibau, will begin the four-day review on January 19. But will four days and a limited terms of reference allow them do justice to the task? Hardly. Café Pacific has previously pointed to the 2007 New Zealand Press Council review (first in 30 years) as a good benchmark for such a controversial mission. (A research paper comparing the Fiji and New Zealand self-regulatory media climates is being published in the next edition of Fijian Studies.)

Undoubtedly, this Fiji panel will come up with a far more robust report and recommendations than the discredited Jim Anthony report. But its limited brief is unlikely to satisfy those civil society groups and commentators who are highly critical of the Fiji media, nor is it likely to quell the regime's frustration with what it sees as a one-sided news media industry.

The muted terms for reference for the Fiji media review include looking into:


Probably the most insightful commentary about what ought to be done with the Fiji Media Council was presented last month by Fiji Times associate editor Sophie Foster at the University of the South Pacific journalism awards.

Posted by café pacific at 4:15 AM No comments: Links to this post

Why UN bodies are failing over human rights 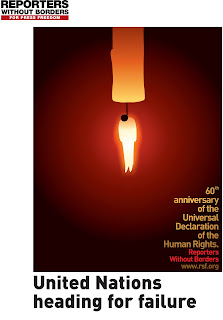 THE world marked the 60th anniversary of the Universal Declaration of Human Rights this week. Media freedom group Reporters San Frontières issued its own report on December 10, giving a poor mark to the Geneva-based Human Rights Council, the main UN body concerned with the issues. Says the RSF:

The UN Human Rights Council is doing little better than its predecessor, the now-abolished Commission on Human Rights, which was completely discredited over
the years, especially when it named a Libyan as its president. The council has the failings of all UN bodies, where member-states are both judges and judged.
States with repressive governments are elected to the council and thus tasked with ensuring respect in other countries for rights they themselves are abusing on a daily basis. Until this absurd situation is ended, the United Nations cannot be said to be fulfilling its goal of protecting human rights.
The use of human rights by countries for their own purposes will not end until the UN Security Council and the whole system of world governance is reformed and enlarged. This issue has been highlighted by the present economic and environmental crisis.
If the UN does not manage to end it, the council will
fail in its mission.

Check out the full RSF report.
Human rights in post-coup Fiji - Why might is not right
Pacific media human rights issues
The Witness take on human rights

Posted by café pacific at 4:02 PM No comments: Links to this post 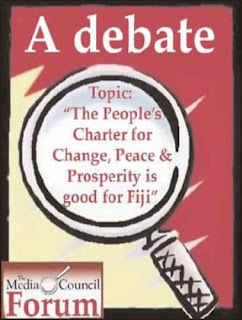 Posted by café pacific at 11:09 PM No comments: Links to this post