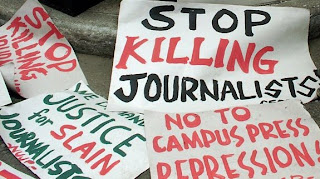 A newspaper columnist has been gunned down in Manila suburb - the first journalist to be murdered this year. Journalists have been murdered or assaulted with some alarming frequency that authorities established a special police unit to investigate cases of violence against the media.
Reporters Without Borders has been quick to put out a statement that it is "shocked" by the murder of newspaper journalist Benefredo Acabal in Pasig City on April 7 and calls on the authorities to do everything possible to establish the motives and bring those responsible to justice. Acabal, 34, was a columnist for The Pilipino Newsmen, a Cavite tabloid.
He was shot five times at close range by a man on a motorcycle and was pronounc

ed dead on arrival at a hospital. The police officer in charge of the case, Lardy Ignacio, said it was too soon to say if the murder was linked to the victim's work as a journalist. The police are looking into the possibility that it was linked to Acabal's involvement in a trucking business.