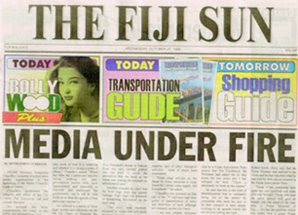 FIJI'S regime, albeit "legal" nowadays, is pressing ahead with its controversial media law "promulgation". It will have a draft amalgation of media laws on the table by next month. Naturally, the local news media are back on the warpath. They are trying to broker some consultation before this media law gets too far down the track. Unfortunately, while the media has been quick to use its power, newsprint, airwaves and cyberspace to air its self-interested views, it hasn't done anywhere such a good job about canvassing the views of civil society and those who are so critical. Why are other stakeholders so intent on seeing the media perform better? Perhaps if the media had done something more proactive about getting its house in order - a bit like the NZ Press Council did with its first independent review in 30 years in 2007 - the stand-off wouldn't have got to this stage. A few quick words from Peni Moore, one of the civil society advocates commissioned to review the media (separately from the Jim Anthony fiasco), in her conclusion for the People's Charter:

To say the media was angry [over the Anthony report] is to understate their point of view. Radio, TV, newspapers and magazine editors and executives voiced their indignation, anger and disappointment at the report. Perhaps the Fiji TV best summarised the many media points of view, saying, that the FHRC seems to share the concern of all political parties and leaders that have been at the helm of power to have “controls that will weaken and severely dilute the rights of the media and individuals as enshrined in the 1997 Constitution”.
Fiji TV said that Anthony Report did not provide specifics on how the media have failed to meet their obligations, and said there is a tendency to heap most of the blame for Fiji’s political problem on the media. “This is quite unfair and below the belt”, commenting that media cannot allow themselves to be mouthpieces of
the government, politicians and political parties.
As a panacea or cure or stimulant toward improving media standards, the National Committee for Building a Better Fiji (NCBBF) recommended a number of changes which included the establishing of the Media Tribunal, that legislation to be enacted to ensure the development and regulation of professional standards of journalism and a levy to be raised to cover the costs.

This, surely, is a pointer to where the promulgation is heading. Ironically, just yesterday Fiji Media Council chief Daryl Tarte reckoned that "self-censorship" had been declining in Fiji. Also yesterday, the Fiji Times admitted it was in contempt over publishing a letter chastising the High Court over its controversial ruling about the legality of the regime.
Posted by café pacific at 9:18 PM

Linking that story to the this one, where the Fiji Times admits that it was in conmtempt.
Yet I find it difficult to understand, that while they admit to the offence, does it mean they should escape punishment?

On a side note, regarding censorship, what are David Robie's views about the US Fairness Doctrine and how that relates to Fiji's new media regulations?

Currently the US Supreme Court is hearing a case on TV vulgarity.

Does Fiji case's dovetail with the US Supreme Court case in the context of media freedom and the issue of freedom of speech?
Meaning that regulations are needed.