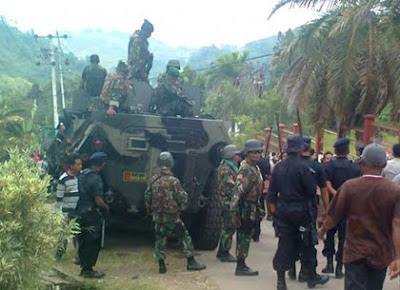 The Church has traditionally been seen as a non-partisan player in Papuan politics. In this statement, Father Neles Tebay tells of his fear that the Church is no longer respected as a safe haven for all Papuan citizens. Indonesian military and police shot directly at participants of the third Papuan People’s Congress as they tried to escape from a church property on the afternoon of 19 October 2011. Father Tebay, rector of the Fajar Timur School of Theology in Jayapura, tells how he heard Indonesian military (TNI) officers shouting, “We’ve got a runner … shoot!” as they ransacked the church property looking for congress participants. (Photo and story: Engage Media):

ON WEDNESDAY, 19 October, at around 9.00am, armed police officers, Mobile Brigade officers and TNI soldiers arrived to the Fajar Timur School of Theology in Pansers (army tanks), patrol cars and trucks.

They patrolled around the school…

They didn’t tell the campus that they were coming. It made us feel very uneasy and we suspected that trouble was looming. We didn’t want to get dragged in to the mess, so we decided to send home all staff at 10.00am.

At around 11.00am, a fully armed joint security team entered the theology campus. They went around at will without notifying anyone from the campus or the seminaries. They rested in a hut, but students and staff asked them not to disturb the study areas. After [a while], they retreated back to the mountains.

In the afternoon, around 3.30pm, several soldiers and officers entered the buildings that housed the theology students, saying that they were looking for the congress participants who had fled the scene. They broke doors, went inside the computer lab and ransacked the place.

A soldier said, "Bring those computers for evidence". Windows were smashed also. A student begged and said, "Please don’t, this is the house of the mission". Many other students were scared and hid in the back room. Several congress participants who had managed to take shelter at the campus hid in the bathrooms. When they tried to escape, I could hear the soldiers shouting, "We’ve got a runner … shoot!".

Meanwhile, also at 3.30pm, Father John Jehuru OSA, rector of the Inter-diocesan Seminary, was in his study room when a bullet came flying through his window. He had been watching the events unfold in Zakeus Field from afar. The bullet came close to him, barely a metre from his body.

The soldiers also went into other buildings. They went into the building that houses seminary students from the districts of Manokwari and Sorong. They yelled at the students: "Is this the house of the mission? Where are those priests? Those stupid priests! The priests who hid the fleeing participants!"

In the building that housed seminary students from Merauke, the soldiers apprehended a student by the name of Agus Alua who happened to be standing outside when the soldiers came. Windows were shattered with bullets. The soldiers that went into this house came in from the mountains. It is unclear whether these were the same soldiers who were at the house earlier, at 11.00am in the morning.

The soldiers chased the fleeing congress participants to the housing complex. They shot tear gas. One solider went inside one of the houses and found a lady hiding underneath the bed. The soldier asked: "Who are you?" She said: "I live here!", the soldier said: "Just get out, don’t be afraid", and the lady, as she got out, from under the bed said, "I’m not afraid of you, sir, but I’m afraid of your bullets and tear gas". The soldier left the house.

The Sang Surya Monastery gave refuge to many of the congress participants. Chair of the Papuan Customary Council (and congress-elected President) Forkorus Yaboisembut and Dominikus Surabut were resting there after the congress ended.

Father Gonsa Saur, head of the seminary housing, was awakened by the gunfire. He put on his Fransiscan robe and walked out. There uniformed soldiers and several plain-clothes officers were about to enter the house when he blocked them. They managed to go in anyway and the father saw the men were carrying rifles and pistols. Due to pressure, the father asked the guests of the house to leave the rooms, several did, but others were still hiding inside.

Violent assaults
Father Gonsa said to the soldiers: "you can take them, but please don’t hurt them". The soldiers kept their word … until they left the housing complex, where they began to punch and kick the congress participants.

President-elect Forkorus Yaboisembut was pulled violently and yelled at by armed plain-clothes officers. A woman was also pulled out from the seminary housing.

One soldier suddenly went up to the second floor. Father Gonsa asked him to come down. Around 10 unidentified persons came of the rooms and surrendered themselves. The soldier told them to squat. There were three women among the apprehended persons.

The Yohanes Maria Vianey Seminary was also used as a refuge for participants. Three soldiers in separate occasions pointed their guns to Father Yan You’s head as head of the seminary. They said: "You are hiding them!". Father Yan said: "Just kill me, shoot me, come on!".

The soldiers broke doors, entered rooms and violently pulled out those in hiding. Seminary students asked the soldiers not to hurt the apprehended congress participants. But a student who was trying to help a participant, who’d been shot, was hit with the butt of a rifle. The student fractured his arm, and his nose swelled after he was hit by a rubber stick. He was also detained for a night at the police station and hospitalised for his injuries.