When violence threatens - Grubsheet under attack 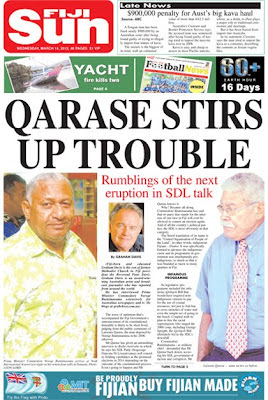 GRUBSHEET'S burgeoning number of opinion pieces on Fiji are largely designed to counter what we regard as the continuing failure of the mainstream regional media to come to grips with the reality of events there. They’re especially aimed at an Australian audience, to highlight what we regard as the folly of Canberra having turned its back on Fiji since Frank Bainimarama’s coup five years ago.

A lot of these pieces are picked up by the mainstream media – The Australian and Sydney’s Daily Telegraph, for instance – or disseminated to a wider regional and global audience through the Pacific Scoop service of the Auckland University of Technology and Pacific Islands Report from the East-West Centre in Hawaii. Some are written as news stories but most are shamelessly opinionated, strong expressions of our own views based not only on on a life-long association with Fiji but having reported political events there for the mainstream media since before the first coup in 1987.

The problem arises when these articles are picked up and republished in Fiji, a country where the separation of news and opinion in the mainstream media doesn’t have a strong tradition. And so it was last week, when the Fiji Sun published a Grubsheet opinion posting on its front page that would have looked very much like news to local eyes. It provoked a wave of outrage, not least from the subject of that article – Laisenia Qarase, the man Frank Bainimarama deposed in his 2006 coup.

As readers can see for themselves in our own comments section, Qarase has gone on the attack against Grubsheet, accusing us of distortion, disregarding the facts and attempting to “crucify” him and his party – the SDL. He’s particularly aggrieved that we’ve accused him of pursuing racist policies in government. As readers can also note for themselves, we stand by that accusation.

But we can also sympathise with Qarase that an article on a humble Australian blog site can so dramatically become part of the domestic political debate in Fiji. If any proof were needed of the power of the internet to amplify the smallest voice, then this is it.

Qarase is not only entitled to defend himself but Grubsheet is delighted that he can now do so fully in the Fiji media for the first time in a long time. The Bainimarama government has lifted censorship and a full-blown debate has erupted about the impending discussions on a new constitution and the unilateral abolition of the Great Council of Chiefs. This is how it should be. It’s also Grubsheet’s view that if Laisenia Qarase intends to stand in the promised elections in 2014, his record in government is also a legitimate subject for debate.

Against all evidence to the contrary, he’s now running the line that the SDL has always been a "multiracial party", didn’t disadvantage other citizens in government and that he’s never believed in indigenous paramountcy. Every village pig in Fiji has suddenly sprouted wings and set off over a moonlit lagoon. But again, Qarase is entitled to put his case. And we’re entitled to put ours.

What is not acceptable are the threats to Grubsheet’s personal safety by Qarase’s supporters. These have come via the main anti-government blog site, Coup 4.5, which has been in our sights before for publishing blatantly racist content against the Indo-Fijian minority. These are “journalists” based abroad who not only routinely censor comments they don’t agree with but now facilitate threats of violence against people they don’t agree with. Here’s the first instance, when Coup 4.5 reported Laisenia Qarase’s first press release in response to the original Grubsheet article ...

Read the attacks and response on the Grubsheet blog.

For Laisenia Qarase, the real enemy isn’t Grubsheet. The real enemy is the cancer of intimidation and racism in his own ranks.
Posted by café pacific at 12:09 AM

Graham,I think the main reason why as you say there is hardly any separation in news from opinion in the media in Fiji is due to the media itself.The way the media aggresively publish opinion/s by its very nature makes that media form or outlet to change readers or viewers perception that what is being publsihed is public opinion and rightly so individuals will feel obliged to respond to such opinions.