Social media and the ANZAC press on Fiji 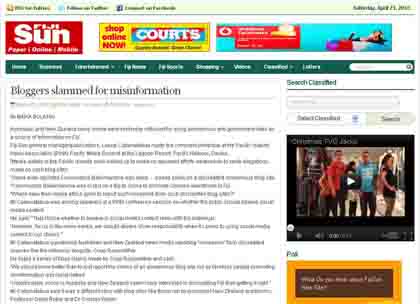 A BELATED posting of a presentation at the recent PINA Pacific Media Summit in Pacific Harbour that took a swipe at the Australian and New Zealand media coverage on Fiji. This was part of a panel discussing social media and credibility:

By  Leone Cabenatabua, publications manager of the Fiji Sun

Should the public believe social media content? That choice rests with the individual.

However, for us in the news media, we should always show responsibility when it comes to using social media content in our stories.

It’s sad to note that prominent Australian and New Zealand media outlets have sensationalised issues about Fiji based on content that are written by faceless cowards.

These are posted in anti-Fiji blog sites like Coup 4.5. For example, if you believed Coup 4.5:
Where have their media ethics gone to report such nonsense from such discredited blog sites?

All these allegations come from people who are out to fulfill their own agendas. They do not have the interest of the nation at heart.

This senseless type of reporting has a huge negative impact on a nation, especially its citizens who are the innocent victims.

It’s a different story when we have prominent academics like Pacific Media Centre's Dr David Robie who have written good analytical pieces for us to ponder on and share ideas of our progress from it.

Or to have blog sites like the ones written by Dr Crosbie Walsh.

In my experience through our numerous exchange of emails and phone calls, he makes it his business that whatever he puts down is accurate information- nothing else.

Again, I’ve nothing against social media or whether people want to believe in its content or not.

There are many good uses for social media.

But as journalists we must be more professional and more responsible than some of those who use social media to spread misinformation.

We should know better than to just report the claims of an anonymous blog site run by faceless people promoting disinformation and racial hatred.

Unfortunately, some  in Australia and New Zealand seem more interested in discrediting Fiji than getting it right.

That, ladies and gentlemen, is my ten cents worth on social media.