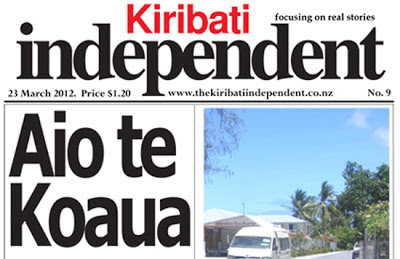 LAST MAY, Café Pacific challenged the "gagging tactics" of President Tong's government over an upstart newspaper in Kiribati. For more than five months avoided granting a publication licence to the Kiribati Independent, regarded as an "opposition" voice. It was ordered to close until licensed. Finally, police intimidated the newspaper by visiting the office. Declaring it was acting legally by publishing the small-circulation paper pending government green light, editor and publisher Taberannang Korauaba decided to suspend publication "indefinitely" while awaiting the paperwork to be sorted out.

Unfortunately, the patience of the newspaper team - which concentrated on the Auckland-based web edition instead - hasn't paid off. For the past six months, the Kiribati Independent has been stonewalled with silence by the Communications Ministry. Korauaba and two of his staff have lately been making available copies of a limited circulation publication by email to free subscribers. This is what Pacific Media Watch reported today on the topic:


“We are publishing with a view to updating our readers with news from NZ and Kiribati,” Korauaba said.

“Also, the idea is to keep doing our job and to see if we can get advertising to pay for the writers in Tarawa.

“I have also decided to launch a weekly news service and to sell our stories to stations that are interested in buying our English-language news every week.”

Korauaba has published the Auckland-based Kiribati and Tuvalu for the two communities and income generated from advertising has been maintain reporters in Tarawa.

Early last year the Paris-based Reporters Without Borders wrote a formal protest to the Kiribati government in support of the Kiribati Independent when the Communications Ministry failed to issue a publication licence.

Since then, the newspaper has had no communication from authorities.

It is believed that the newspaper's sole distributor was intimidated by police inquiries and staff have been subjected to threatening anonymous emails.

The newspaper's legal advice at the time was that the law had not been broken.

The Kiribati Independent was the fourth newspaper in the country, published fortnightly and had a circulation of about 500. It was printed by the Catholic Church's Maria Printers.