The horrors of PNG's Manus Island - by a whistleblower 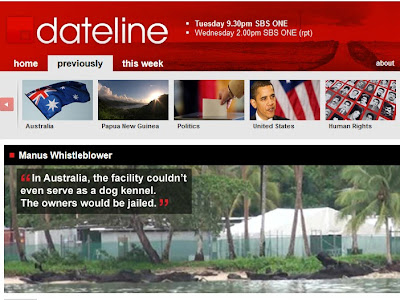 TONIGHT'S SBS Dateline programme has an exclusive insight - Manus Whistleblower - into the horrors of life within Australia’s refugee centre at Manus Island in Papua New Guinea.

Reporter Mark Davis speaks to a detention centre whistleblower, who has explosive allegations of detainees being sexually abused and tortured by other asylum seekers.

With no facilities to segregate or remove the abusers, Mark hears of the desperation for those continually being abused while waiting months for their asylum applications to be processed … attempted suicides and self-harming are said to be an "almost daily" occurrence.

The allegations come as the Australian government announces all asylum seekers arriving by boat will be processed and resettled in Papua New Guinea, with the Manus centre to be expanded.

Dateline's whistleblower interview follows Mark’s disturbing story two months ago about life at Manus Island, when Australian officials at the detention centre went to great lengths to stop him filming.


On tonight's programme, Mark also puts his findings to Australia’s new Immigration Minister Tony Burke, and asks him what he plans to do about it.