“The bomb will not start a chain reaction in the water, converting it all to gas and letting all the ships on all the oceans drop down to the bottom. It will not blow out the bottom of the sea and let all the water run down the hole. It will not destroy gravity. I am not an atomic playboy.”
– Vice Admiral William P. Blandy, Bikini bomb test commander, 25 July 1946

WHEN the military scientists of an advanced technological nation deliberately explode their largest nuclear bomb (and 66 others) over Pacific islands and use the opportunities to study the effects of radiation on nearby native people, which group is best described as “savage”?

And what should you call the people who prevent a documentary about these American post-war crimes from reaching a wide audience in the United States?

Nuclear Savage is a recent documentary film that explores American nuclear weapons testing in the Marshall Islands, 1946-1958 - and particularly the secret Project 4.1: an American experiment in exposing Pacific Islanders to overdoses of radiation – deliberate human radiation poisoning – just to get better data on this method of maiming and killing people.

The public broadcasting establishment has spent more that two years keeping this story off the air.

The preview reel of Nuclear Savage includes a clip with a stentorian newsreel announcer reporting on the American treatment of Marshall Islanders in April 1957, and explaining to his predominantly American audience: “The Marshallese caught by fallout got 175 roentgens of radiation. These are fishing people, savages by our standards, so a cross-section was brought to Chicago for testing. The first was John [Anjain], the mayor of Rongelap Atoll…. John, as we said, is a savage, but a happy, amenable savage.”

Radiation dose
So how serious is 175 roentgens (assuming the measurement is accurate)? In 1950, the International Commission on Radiological Protection (ICRP) recommended that human radiation contact should not exceed 0.3 roentgen per week for whole-body exposure [“roentgen” as a measure of radiation dose has since been replaced by “rem” (for “roentgen equivalent man”)].

It’s not clear how long the Marshallese were exposed to radiation levels of 175 roentgens – or on how many occasions – but that amount was more than 580 times what was then considered a safe weekly exposure.

Public broadcasting paid for this film – and is now suppressing it.

In 2005, director Adam Horowitz, a former Greenpeace campaigner, started work on Nuclear Savage, his second documentary about the American military use and abuse of the Marshall Islands.

Horowitz has a contract with Pacific Islanders in Communications (PIC), which describes itself as “a national non-profit media arts organisation” whose mission is to:


“support, advance and develop programming that enhances public recognition of and appreciation for Pacific Islander history, culture, and society.

"In keeping with the mission, PIC provides funding for new programmes primarily for public television.

"We work with independent producers to create and distribute programs about Pacific Islanders that bring new audiences to public television, advance issues and represent diverse voices and points of view not usually seen on public or commercial television.”

Off-air roadbocks
Among its efforts to carry out this mission, PIC supported the production of Nuclear Savage with $100,000 passed through to Horowitz from the Corporation for Public Broadcasting (CPB).

Horowitz delivered a completed, 87-minute version of Nuclear Savage in October 2011 – the same month it was nominated for Best Environmental Film at the Amsterdam International Documentary Film Festival.

That was also the same month various public broadcasting officials started putting up roadblocks to keep the movie off the air, a delaying tactic that continues into 2014.

FAIR (Fairness & Accuracy in Reporting) reported the story in detail as Nuclear Stalemate in Extra!

One of the first requests, from Leanne Ferrer at PIC, was for a shorter version at 60 Minutes. Rather than have Horowitz cut his film by 27 minutes, PIC hired its own editor and controlled the editing process.

Part of Ferrer’s concern reportedly was a sort of politically correct reverse racism, her objection that there was too much of Horowitz in the film and he’s not a Pacific Islander. The shorter version has less of Horowitz.

And the PIC web site pitches Nuclear Savage: The Islands of Secret Project 4.1 as a “portrait of Pacific Islanders struggling for dignity and survival after decades of intentional radiation poisoning by the US government.”

“Some use the term ‘savage’ to refer to people from primitive cultures, but nuclear experimentation pushed savagery to new levels. In the 1950s, the US conducted 67 atomic and hydrogen bomb tests in the Marshall Islands, vaporising islands and exposing entire populations to fallout.

"The islanders on Rongelap received near fatal doses of radiation from one test, and were then moved onto a highly contaminated island to serve as human guinea pigs for 30 years. 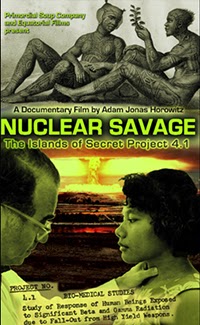 In 2013, PBS World Channel scheduled Nuclear Savage for four showings on May 28 and 29 – and PBS executive Tom Davison emailed Horowitz in advance, saying “Congratulations on this airing".

When the airing failed to take place, without explanation from PBS, Horowitz was unable to get a straight answer from Davison, Ferrer, or anyone else in the public broadcasting food chain, although PIC executive Amber McClure wrote with Orwellian deceit: “Your programme has not been declined by PBS.”

In December 2013, in his original letter to the editor of the Santa Fe Reporter, Horowitz summed up his experience to date this way:


“PBS ‘World Channel’ executives accepted, scheduled and advertised the show nationally, only to reverse their decision and cancel the show at the last minute. The show was originally accepted and then later rejected by two different branches of PBS, on three different occasions.

"PBS executives promised to deliver to me, a list of the precise points in the film that they felt represented ‘bias,’ or questions of ‘fact,’ and I promised to work with them to fix any problems. But PBS has still never delivered any specifics whatsoever of their complaints about the film, a film by the way that they have already completely reworked with their own editors.”

The project has also had support from private foundations, including the Kindle Project, where: “We support whistleblowers and rabble-rousers. We give grants to peacemakers and seed savers. We make awards to artists and activists. We support people and projects working towards solutions and alternatives to systems in transition. We seek out the strange, the bizarre, the unpolished, the less likely to receive funding. We fund individuals and initiatives that may seem risky or radical to mainstream funding sources….”

Public information is not always well known by the public.

The unsigned “Notes on Nuclear Savage: The Islands of Secret Project 4.1” on the Kindle Project website from April 2012 talks about the ways the film was succeeding, despite unofficial quasi-government censorship and beyond “the glamorous festival circuit”.

“Nuclear Savage”: Public TV doesnot show it: But the International Uranium Film Festival does show it.
“Nuclear Savage: The Islands of Secret Project 4.1” received the Yellow Oscar of the International Uranium Film Festival (IUFF) in 2013 in Rio de Janeiro. Now the Festival is coming to Washington and New York together with Nuclear Savage.
Next Screenings of Nuclear Savage in Washington DC, Goethe-Institut / Goethe-Forum (Feb. 10-12) and in New York Brooklyn, The Pavilion Theater (Feb. 14-19) with the presence of the film director Adam Horowitz.
More Info:
http://www.goethe.de/ins/us/was/ver/en12059524v.htm
http://www.paviliontheater.com/?p=content&id=Uranium+Film+Festival+2014+Feb+14+to+Feb+19+