Flashback to the 1968 My Lai massacre: 'Something dark and bloody'


RT's special report on the My Lai massacre and the cover-up of this atrocity.

THE MELBOURNE Sunday Observer -- the original newspaper of that name which campaigned against Australian involvement as a US surrogate in the Vietnam War -- published photographs of the My Lai massacre in December 1969. It was prosecuted for "obscenity" for reporting the atrocity but the charge was later dropped.

Michael Cannon was editor and David Robie chief subeditor at the time (and later the editor). The photographs were published by arrangement with Life Magazine and were later shown to Federal MPs in an attempt to change Australian government support for the war.

The photographs were published during a period when newspapers in Australia rarely published pictures of bodies, and certainly not as victims of "atrocities" by "our side". This website has a small selection of the photographs published by the Observer.

The Sunday Observer was the springboard for the launching of Nation Review in 1970: 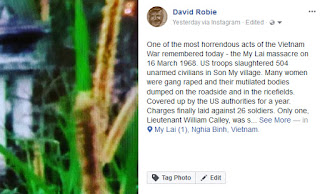 One of the most horrendous acts of the Vietnam War remembered today - the My Lai massacre on 16 March 1968. US troops slaughtered 504 unarmed civilians in Son My village. Many women were gang raped and their mutilated bodies dumped on the roadside and in the ricefields. Covered up by the US authorities for a year. Charges finally laid against 26 soldiers. Only one, Lieutenant William Calley, was sentenced to life, but he only served 3 years under house arrest. I was chief subeditor of the Melbourne Sunday Observer at the time and we published several of witness military photographer Ron Haeberle's photos as evidence.


My Lai was one of nine hamlets clustered near the village of Song My, a name sometimes used also for the hamlets. GIs called the area "Pinkville" because it was coloured rose on their military maps and because the area had long been known as Viet Cong territory.

The action at My Lai received only a passing mention at the weekly Saigon briefing in March of 1968. Elements of an American division had made contact with the enemy near Quang Ngai city and had killed 128 Viet Cong. There were a few rumours of civilian deaths, but when the US Army looked into them -- a month after the incident -- it found nothing to warrant disciplinary measures.

The matter might have ended there except for a former GI, Ron Ridenhour, now a Californian university student. After hearing about My Lai from former comrades, he wrote letters to congressmen warning that "something dark and bloody" had taken place.

Now an officer, Lieutenant William Calley, has been charged with murder of "an unknown number of Oriental human beings" at My Lai, and 24 other men of C Company, First Battalion, 20th Infantry, are under investigation. The world is demanding to know what happened at My Lai, who ordered it, and whether or not US troops have committed similar acts in Vietnam.

Because of the court-martial, the Army will say little. The South Vietnamese government, which has conducted its own investigation, says that My Lai was "an act of war" and that any talk of atrocities is just Viet Cong propaganda.

This is not true.

The pictures published in this newspaper by Ronald Haeberle, an Army photographer who covered the massacre, and reports in the past three weeks confirm a story of indisputable horror -- the deliberate slaughter of old men, women, children and babies.

Eyewitness reports indicate that the American troops encountered little -- if any -- hostile fire, found virtually no enemy soldiers in the village and suffered only one casualty -- a self-inflicted wound. The people of My Lai were simply gunned down.

'Frightful violation'
"The My Lai massacre represented a frightful violation of the principle of humaneness. To tell as much of the truth as was then available about that violation, and to make sure at the same time that the accused Lieutenant William Calley would be treated justly, required extraordinary care by a journalist. More than a mere set of court-martial papers needed to be inspected. Calley needed to be found and interviewed.

"In acting on that judgement, journalist Seymour Hersh used many standard reportorial techniques and several ingenious ones. Passive deception, allowing persons on the military base [Fort Benning] to make their own most natural inference as to his identity, could be defended so long as it did no avoidable harm - that is, so long as it did not risk injustice or unfairness to innocents caught up in Hersh's quest for Calley. It can be argued that Hersh allowed his key source, Jerry, to make his own decision to obtain Calley's file. But, in fact, Hersh appears to have actively created a situation in which Jerry, already a busted private, risked further penalty to himself unless he cooperated. Having made an authoritative entrance demanding Jerry's presence, Hersh met with Jerry outside, 'and told him what I wanted'."


Helicopter pilot intervened for victims
The horror only began to die down when army helicopter pilot Hugh Thompson Jr landed between the soldiers and the villagers, threatening to fire at the troops. After taking off again, the pilot witnessed soldiers chasing civilians and landed the helicopter between them. He evacuated the villagers and returned to the scene to search for survivors. Thompson also told his superiors about the massacre, and the order was sent back to “knock off the killing”.

“After the shooting was over, the soldiers went and were eating their lunch, really literally next to the ditch, next to the bodies. And that’s how disconnected you get,” Seymour Hersh, the investigative reporter who uncovered the story, said on Democracy Now.

Despite Thompson filing a report, a military investigation found there had been no massacre. Captain Ernest Medina, who had ordered the soldiers to be aggressive in their operations, told superiors the unit had killed lots of VC fighters.