The 4300-km Trans-Papua Highway costing some US$1.4 billion was supposed to bring “wealth, development and prosperity” to the isolated regions of West Papua.

At least, that’s how the planners and politicians envisaged the highway far away in their Jakarta offices.

President Joko “Jokowi” Widodo is so enthusiastic about the project as a cornerstone for his infrastructure strategies that he had publicity photographs taken of him on his Kawasaki trail motorbike on the highway.

But that isn’t how West Papuans see “The Road”.

“The road would bring the death of their centuries-old way of life, previously undisturbed aside from the occasional Indonesian military incursion and the mostly welcome arrival of Christian missionaries. 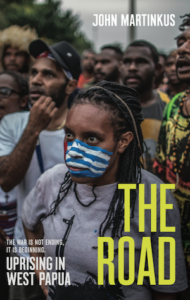 “The road would bring the death of their centuries-old way of life, previously undisturbed aside from the occasional Indonesian military incursion and the mostly welcome arrival of Christian missionaries.

“It was inevitable, really, that the plan by the Indonesian state to develop the isolated interior of the West Papua and Papua provinces would meet resistance.”

For centuries the Dani and Nduga tribespeople had fought ritualistic battles against each other – and outsiders.

That is, until the Indonesians brought troops and military aircraft to the highlands that “did not play by these rules”.

On 1 December 2018, a ceremony marking the declaration of independence from the Dutch in 1961 by raising the Morning Star flag of a free Papua – as Papuans do every year – ended in bloodshed.

Usually the flag waving – illegal as far the Indonesian authorities are concerned – goes unnoticed. But the highway has now come to this remote village.

Indonesians took photos on their cellphones of the flag raising and this sparked the kidnapping of 19 road construction workers and a soldier (although pro-independence sources argue that many of the workers are in fact soldiers) and they were shot dead.

The Indonesian military have carried out reprisal raids In the 18 months since then forcing some 45,000 people to flee their villages and become internal refugees. Two thousand soldiers, helicopters and 650 commandos are involved in security operations and protecting the highway.

‘Helicopters are the worst’

“It is the helicopters that are the worst. They are used as platforms to shoot or drop white phosphorous grenades or bomblets that inflict horrible injuries on the populace,” writes Martinkus.

The Trans-Papua Highway would realise the boast of the founding Indonesian President Sukarno for a unified nation – “From Sabang to Merauke”, is what he would chant to cheering rallies.

Sabang is in Aceh in the west of the republic and Merauke is in the south-east corner of Papua, just 60 km from the Papua New Guinean border.

The Indonesian generals, not wanting anything to interfere with their highway exploitation plans, have vowed to “crush” the resistance. However, the contemporary Papuan rebels are better armed, better organised and more determined than the earlier rebellion that followed the United Nations mandated, but flawed, “Act of Free Choice” in 1969 when 1026 handpicked men and women voted under duress to become part of Indonesia.

Martinkus, a four-time Walkley Award-nominated investigative journalist specialising in Asia and the Middle East, has travelled to both ends of this highway. He reported in the early 2000s from West Papua until the invasion of Iraq and Afghanistan became his major beats.

His earlier book A Dirty Little War exposed the hidden side to the Timor-Leste struggle for independence.

The Road traverses the winding down of Dutch rule, early history of Indonesian colonialism in West Papua, the environmental and social devastation caused by the Grasberg mine, the petition to the United Nations, the Nduga crisis, the historic tabling of a 40 kg petition – 1.8 million signatures – by the United Liberation Movement for West Papua calling for a referendum on independence, the so-called 2019 “monkey” uprising that began as a student clash in the Java city of Surabaya and led to rioting across Papua, and now the coronavirus outbreak.

Martinkus pays tribute to the handful of earlier journalists who have risked much to tell the story that Australian and New Zealand diplomats do not want to hear and has been denied by Indonesian authorities. An ABC Foreign Correspondent programme, including West Papuan journalist Victor Mambor, last week was one of the rare exceptions.

Amnesty International has estimated that more than 100,000 Papuans have died since the Indonesian takeover. Four Australian-based researchers have embarked on a new project to map the violence in West Papua.

“Eventually in the 1980s and the 90s, writers such George Monbiot ventured into the areas cleared out by the Indonesians [for palm oil plantations and timber]. Robin Osborne also produced a landmark account of that time,” he writes.

“Filmmaker Mark Worth, photojournalist Ben Bohane and ABC-then-SBS reporter Mark Davis continued to try to cover events in West Papua. Lindsay Murdoch of Fairfax provided excellent coverage of the massacre on the island of Biak, off the north coast of Papua.”

As in Timor-Leste, Martinkus recalls, the fall of the Suharto regime in May 1998 provided a “period of confusion among the military commanders on the ground”.

“They didn’t know if they could expel, arrest or kill journalists as they had in the past, and it created an environment where it was finally possible for reporters to get to previously inaccessible places and speak to people.

“The turmoil in Jakarta had created a kind of stasis among the military commanders in the far-flung provinces.”

Nevertheless, the Indonesian military watched and waited – and noted and recorded who the Papuan dissenters were. Who to arrest and kill when political conditions became more helpful.


First, the daily oppression that West Papuan people face – and have faced for half a century – was of little interest to news editors.

“But it [is] that daily fear, and the casual violence and intimidation, that [is] the story,” says Martinkus.

“For Papuans it [has] become a way of life: constant intimidation and violence and extortion by the Indonesian military, punctuated by short, sharp moments of protest and resistance, followed by the inevitable crackdown.”

Martinkus recalls his experience of when reporting in East Timor, “in order to get a story run you had to have more than 10 dead; the daily grind of one shot there, one beating there, one arrest there, never made it into the press.

“I’ll never forget the cynical words delivered down the phone by one Australian editor after I had watched a man – a boy, really – shot dead in front of my eyes as I cowered in a ditch to avoid Indonesian gunfire in East Timor.

“’So what are your plucky brown fellows up to today?’ he said. He didn’t run the story.”

‘Cosy relationship’ between Australia, Indonesia
Another factor is the “cosy relationship” between Indonesia and Australia (and New Zealand) and Martinkus describes how this was tested in January 2006 when 43 Papuan asylum seekers beached in Cape York, Queensland. They had sailed for five days from the southern coast of Papua to escape Indonesian “genocide”.

While they were detained on the remote Christmas Island centre for refugees, they were all – except one – eventually granted with a temporary visa.

Another reason for the media silence, according to Martinkus, is the “lingering memory of the Balibo Five” – the Australian-based journalists, including a New Zealander, who met their fate in East Timor in 1975.

“They were killed in cold blood in the border town of Balibo as the Indonesians prepared to invade, and [a sixth executed] at the wharf in Dili on the first day of the invasion.

“The ruthlessness of those killings, the utter disregard of any international norms and the spineless and reprehensible cover up of the circumstances of their deaths by both the Indonesian and Australian governments had spooked the journalists and media organisations.

“If the Indonesians said you couldn’t go to an area, you didn’t go; the assumption was that they would kill you and no one would intervene.”

Martinkus says that “same attitude prevailed” when he began reporting in Indonesia in the mid-1990s.

‘Random killings, endless arrests’
The author is critical of the “centrist” President Widodo who was elected in a landslide in 2014 – and for a second term last year – on a promise of a more relaxed policy on access to West Papua.

“One recent video shows a Papuan man being bound the sliced with a large military knife as Indonesian troops stand around laughing.

“Another shows a Papuan man restrained in a cell as Indonesian soldiers throw in a snake and take pictures of his terror.”

Martinkus questions the cruel rationale for the need of Indonesian soldiers and police to “drip-feed appalling abuses” on social media.

“Is it some kind of warning to Papuans not to support independence, or just a symptom of the moral vacuum they enter once they are deployed to Papua?”

Martinkus believes that, in spite of the bravado and harsh treatments, Indonesians are “fundamentally scared of the Papuans”.

Although Indonesians have been in West Papua for more than 50 years, “West Papua and its people are still very foreign to them.” They have tried to create a society that is a “mirror image of their own in a land they occupied against the wishes of the local population”.

The attempt has failed, and the Papuans will never stop resisting until they are free.