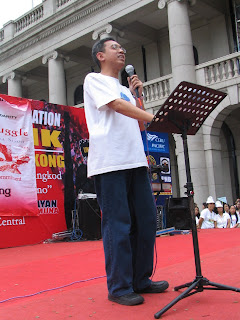 The globalised war on terror is striking at any progressive forces on a variety of pretexts. This from Karapatan on the "political" arrest of exiled Jose Maria Sison, founder of the Communist Party of the Philippines (CPP) in his "safe haven" in the Netherlands.

MANILA, Philippines -- (UPDATE 2) A lawyer of Jose Ma. Sison in The Netherlands and Dutch authorities have confirmed the arrest of the Communist Party of the Philippines (CPP) founder Tuesday.
"The communist leader was suspected of giving orders, from the
Netherlands, to murder his former political associates in the
Philippines, Romulo Kintanar and Arturo Tabara," the Dutch national
prosecutor's office said in a statement quoted in an Agence
France-Presse report.

Kintanar and Tabara led a faction of the CPP that broke away from the
party in the early 1990s. They were subsequently assassinated by the
New People's Army, the CPP's armed wing. 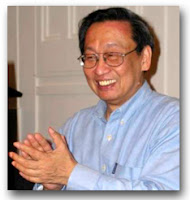 peace negotiator Luis Jalandoni, said he was on his way to see his
client but could not confirm if the arrest of Sison was related to the
murder charges filed against the CPP founder in the Philippines.

However, Jalandoni said he did not know of any murder charges Sison is facing in The Netherlands, where the CPP founder has been living in exile since 1987.

In a separate phone interview, one of the lawyers helping work for the resumption of peace talks between the government and NDF said a judge and policemen went to Sison's house in the town of Utrecht to interrogate him.

The lawyer then said Sison was brought to The Hague, the Dutch capital.
The negotiations have been stalled for around three years because of
the inclusion of the CPP, NPA and Sison in the terror lists of the
United States, European Union and other countries.

Carl Ala, spokesman of the Kilusang Magbubukid ng Pilipinas (KMP,
Peasant Movement of the Philippines) said Sison could be held for
three to as long as 105 days on charges of "multiple murders and for
calling for more murders."

"They are really intensifying the attacks on progressive forces," said
Ala in a text message.

"This bodes ill for the peace process. The arrest was most probably
undertaken with the knowledge and prodding of the Arroyo government
who is out to sabotage all hopes for peace talks," said Reyes.