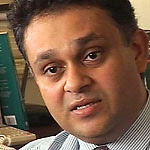 Former journo and ex-MP Alfred Sasako has now weighed in over the Moti affair. And there's no doubt in his mind - Attorney-General Julian Moti (pictured) and his backers have misled the Solomon Islands and PNG governments over the status of his controversial child sex case in Vanuatu. It's still open before the Vanuatu Supreme Court, says the scribe based on his own inquiry. Sasako reckons constitutional lawyer Moti should come clean and return to Vanuatu to face the music before taking up the Solomon Islands post. But then Sasako has always been cosy with Canberra. He says:
So whose story should Solomon Islands ordinary citizens believe – Moti’s or the Registrar of Vanuatu Supreme Court? The credibility of the two men is at stake. You be the judge.
For me, enough is enough. It is important Moti clears his good name before holding the nation’s top legal post. He has nothing to lose if he has nothing to hide. Let’s get out of pushing ourselves on to the listing of the laughing stock nations of the world in this mad case controversy. It is total madness to continue with it.
The suggestion that Solomon Islands should take the matter to the International Court of Justice is just as laughable as it is unbelievable. Gee, there must be something in Moti most Solomon Islanders don’t seem to see that we are prepared to throw in every ounce of the nation’s resources to back the man up all the way to The Hague?