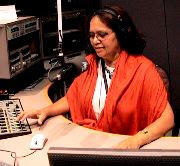 Timor Leste's Secretary of State for Security Francisco Guterres has now apologised for the “unwarranted use of force” against Timor Post reporter Agustinho da Costa on the night of 22 February. He promised that the security forces would ensure that this kind of incident did not recur. Military police seized Da Costa while he was delivering last weekend's edition of the paper to the printery in Dili. The police held him for 11 hours and beat him several times, leaving him with extensive bruising to the face.

Meanwhile, Fretilin MP and former cabinet minister Jose Teixeira has complained to SBS TV over a recent report which he claims is defamatory.
His open letter:
Friday, February 22, 2008,
To: Complaints, SBS Australia
Yesterday your national news bulletin carried a report from a reporter in Timor-Leste, Maria Gabriela Carrascalao (pictured), wherein my character was seriously defamed by both Ms Carrascalao and SBS. The report imputed my involvement with the contemptible and abhorrent criminal attacks on the President and Prime Minister of Timor-Leste.
Your report and the imputations regarding me in the report are false and misleading. I have denied in a press release of the 20th of February 2008 that would have been accessible denied any involvement with these events. A press conference was also held by the FRETILIN parliamentary group on my behalf making it clear that this was based on nothing more than a political witch hunt of me and FRETILIN.
Facts would also have been available to your reporter yesterday that on February 20, the day after I was the subject of the police action, the prosecutor general himself stated that the police had acted "outside procedures", and that I was not and have never been a person named in a list provided by the prosecutor general to the police for questioning.
After being taken into the Dili Police Headquarters without either a warrant or another lawful reason, and in total disregard of my immunity as a member of the Timor-Leste National Parliament, I was informed by the commander of the National Investigations Division, a joint Timor-Leste Police and UN Police unit, that they did not have any requirement for my presence for questioning. However, given the lateness of the night and after interventions on my part by some of the FRETILIN leadership, I was allowed to and in fact driven to a friend's residence where I stayed for the evening.
The fact that I was taken in 45 minutes before the commencement of the nightly curfew period is significant, as I was informed the following day by many police that many people were picked under similar circumstances to myself who were detained overnight at the police station but released in the morning for want of any basis of evidence whatsoever.
I presented the following morning as agreed with the commander of the National Investigation Division and gave a short statement. However, the police who took my statement did not have any facts to put to me because they had not been involved in bringing me in and other than a general knowledge of being brought in as a witness, knew nothing else. After giving a short statement I was allowed to leave unimpeded and without further requirements from the police.
However, prior to leaving, the senior UN Police officer requested to speak with me and reiterated what had been told to me by the Timorese National Investigation Division Commander, that being that I was not named or known to them on any list provided by the Prosecutor General's Office from whom they took their instructions during the investigation of the events of 11th February 2008.
On the evening of my being subject to police action, a senior FRETILIN leader spoke to the Deputy Commander of the Timor-Leste National Police Operations who informed him that he was aware of the operation against me and ordered it. Though asked, he declined to comment on who gave him orders to order the operation against me. It is known that the prosecutor general's office was not aware or involved with the operation and nor was the National Investigations Division.
The fact is that orders were given and FRETILIN and I are demanding in Parliament to know, as was demanded in the media conference on February 20, exactly who ordered that I be taken in for questioning.
All these facts were readily ascertainable by your Dili reporter had she bothered to seek information or even a comment from myself or other FRETILIN spokespersons, so as to report in a more balanced and truthful manner.
I have consistently denied knowing any of the persons suspected of being involved, including the deceased Reinado or of in any way having any involvement whatsoever with them or any of their activities whatsoever.
It is our firm belief that the police action against me was a politically motivated action with the knowledge of the government, aimed at tarnishing me good name and to undermine the effectiveness of my role as a FRETILIN media spokesperson and liaison officer. FRETILIN has and will continue to insist on an answer as to who gave the orders to the police to take the action they did against me.
I am currently taking legal advice and intended to commence all relevant legal proceedings in whichever jurisdiction may be necessary to seek to remedy the extensive damage that has already been sustained by my previously good name and character as a result of your defamatory report and other reports as well.
In the interim, I hereby demand that you broadcast a retraction taking into account the facts that were already available to your reporter and your network when the story ran last night. This will only go a small way to remedying the damage already sustained by my hitherto good name and character.
Jose Teixeira MP
Dili, Timor Leste
Posted by café pacific at 10:19 PM