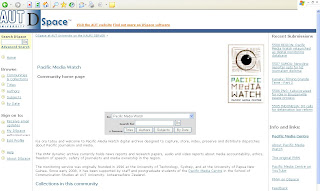 Just 11 years or so after it was founded, Pacific Media Watch has discovered a new lease of life at its new home at AUT University. Always with an eye to journalist freedom in the region - and sometimes a persistent thorn in the side of self-interested media fat cats - the voluntary media monitoring service has been relaunched as a "future proofed" dynamic digital resource. Launching the database along with the latest edition of the research journal Pacific Journalism Review, Office of Pasifika Advancement director Pauline Winter described the new media resource as invaluable for media and journalism schools. The new Pacific Media Centre took over development of the PMW service last year and has established the database as the first project on DSpace, a digital archive set up by the university's Creative Industries Research Institute (CIRI). The revamped service combines more than 5000 news reports on Pacific media freedom, ethics, education and training issues - updated daily - with a major archive of media research reports and documents, and audio and video clips. But the new database is just at the first stage of its new development. Many new improvements will come in the months ahead.
The original PMW news monitoring service was established in 1996 as a journalism partnership between the University of Technology, Sydney, and the University of Papua New Guinea. The University of the South Pacific journalism school has also been a key contributor in recent years.
PMW campaigned in support of Tongan publisher Kalafi Moala, fellow journalist Filokalafi 'Akau'ola and pro-democracy MP 'Akilisi Pohiva who were wrongfully jailed that year for contempt of Parliament.
At the launch, I paid tribute to the researchers and students involved in the centre. But I would especially like to single out Sydney television journalist Peter Cronau for his sustained work on PMW over many years - including setting up the original PMW website and Kiribati journalist Tabs Korauaba who helped work on developing files for the digital archive last year.