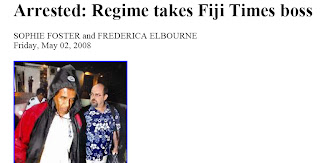 A QUICK round-up of some of Café Pacific’s 2008 random media highlights (and lowlights):

Weapons of Mass Delusions Award for media exposes: The disturbing yet highly entertaining book Flat Earth News by Guardian investigative journalist Nick Davies. Not much on the Oceania region (New Zealand, for example, rates merely a page – with a section in the distorted news-from-nowhere basket), but the insights into “churnalism” are global and examples are rampant throughout the Pacific media.

Transparency Pacific Award for media freedom: Fiji’s military backed regime wins this category virtually uncontested for deporting the country’s two most influential publishers on “security” pretexts – Evan Hannah of the Fiji Times in May and the Fiji Sun’s Russell Hunter in February. As the FT summed it up in its review of the year:

“Not only were they denied their rights, they were stolen in the night and deported despite court orders issued that they be produced in court.
“In fact, so desperate were the state officials to rid Australian nationals before being directly served the orders that Mr Hannah was deported to South Korea, where he had no links at all; neither family or friends.
“And, on the same day Mr Hunter – who was the first to be meted this unsavoury fate, was deported, the Immigration Act was amended to bar any court appeals against the Immigration Minister’s decision to deport.”

George Orwell Award for media insights: Dr Jim Anthony and the Fiji Human Rights Commission for a so-called Fiji media review ironically dubbed in newspeak “Freedom and Independence of the Media in Fiji”. It had been widely known in media circles for some time that some sort of overhaul of the Fiji media self-regulatory mechanisms was long overdue. (If for no other reason than to head off the inevitable government clampdown using the law "promulgation"). A sort of updated Thomson Report (1996 - commissioned by the post-Rabuka coups government) has been needed. But the racist invective and malice directed at the media plus the lack of rigorous methodology in the Anthony report made a mockery of this process. The 2007 NZ Press Council review is an example of how such an exercise can be conducted constructively. Hopefully, the recently announced Fiji Media Council review can produce some answers.

Pseudo Events Award for regional j-school publications: Te Waha Nui student newspaper for its Ossie award for best regular publication. This should be something to really celebrate, but as a co-founder of this paper (in 2004 - and I am no longer involved), I cannot truly share the bubbly. Too many flaws for my liking. The recent website revamp isn’t a patch on its newcomer rival NewsWire at Whitireia Journalism School. (An example of this was NewsWire’s vigorous coverage of the NZ general election – TWN started off well and then abandoned coverage two weeks before the actual poll). And recent reflections on gatekeeping at the paper are rather revealing. Incidentally, Pacific uni j-school papers – such as Liklik Diwai, Uni Tavur (deceased) and Wansolwara – have done remarkably well in the Ossies over recent years.

Waigani Ostrich Award for media relations and investigation: Sir Michael Somare’s government for the inept handling of the cash-for-recognition Taiwan affair and stonewalling of the media. The PNG media has an enviable track record for media investigations into corruption and did a fair job in digging over this scandal. But the media-political climate has still had a ticking off from global integrity groups and the industry failed to live up to its achievements with an ugly end-of-year brawl.