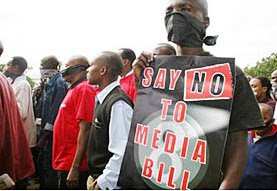 THOSE fretting over Fiji's proposed "media promulgation" law (what happened to its promised unveiling last month?) ought to consider the latest chilling of press freedom in Kenya. President Mwai Kibaki has signed into law a draconian Communications Amendment Act that will curb press freedom. According to a BBC dispatch about the development:

The law gives the Kenyan authorities the power to raid media offices, tap phones and control broadcast content on grounds of national security. Kibaki said he had carefully considered the journalists' concerns but added press freedom must go hand in hand with responsibility. He said the bill was crucial for Kenya's economic development.
In a statement, Kibaki added that regulating the electronic media would promote and "safeguard our culture, moral values and nationhood". The Kenyan Communications Amendment Bill gives the state power to raid media houses and control broadcast content.

The Fiji Media Council has called for public submissions on the future of the council and its self-regulatory procedures. The deadline is January 16. Café Pacific hopes that this belated, long overdue review will add a constructive and level-headed dimension not too late to have some sobering influence on the regime's planned "catch all" state regulatory framework. One of three people named to conduct the review - Transparency International Fiji chair Suliana Siwatibau - has called for an urgent national feedom of information law in response to a proposed crackdown on state whistleblowers. Write to: Public Submissions, PO Box 11852, Suva, Fiji. Email: mediac@connect.com.fj