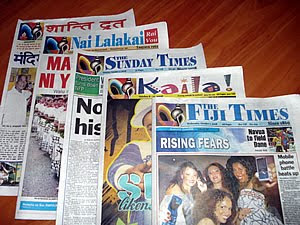 AN ITEM that popped up today on Croz Walsh's Fiji blog taking the mickey out of a "profound shame" article by a former Fiji Times editor-in-chief, Rory Gibson, in the Brisbane Courier-Mail. It ran under this heading:

Q. What does the Fiji Times, the Townsville Bulletin, the Australian and the Courier-Mail have in common?

A. They are all owned by Rupert Murdoch's News Ltd and they've all employed Rory Gibson as editor, editor-in-chief, chief subeditor or senior journalist at some time or other.

Rory has the reputation of writing humourous articles. If you're a kookaburra, you'll really laugh at his latest effort, Australian tourists turn a blind eye as Fiji's best people persecuted in the Brisbane Courier-Mail.

He writes that "it should be a source of profound shame to our country that Australians are going on holidays to Fiji in record numbers".

Why? Because they are gifting "dollars to the coffers of a nation that is run by a military dictatorship little better than any apartheid regime operating in South Africa's dark ages".

Forget that most of the dollars stay in Oz and that thousands of ordinary Fijians live on what's left. Just think back to Soweto, S. Africa, 1976. Police open fire on 10,000 protesters. Fiji today: No guns fired. Apartheid South Africa: All ANC leaders, including Nelson Mandela imprisoned, many for life. Fiji: Short-term arrests but no political prisoners; former Prime Ministers drinking coffee in Downtown Suva.

And who is the cause of the shame in Fiji? "We can all laugh," he writes unblushingly, "that our Melanesian neighbours are ruled by a bloke with a name that sounds like an '80s girl band, and assuage our consciences by believing Commodore Bainimarama's claptrap about restoring fairness to Fiji's racist electoral system." Girl band? Claptrap? Restoring? It wasn't a racist electoral system?

And what are the effects?

"This Pacific tragedy isn't about whether the Fiji Times is being edited under the baleful glare of one of Bainimarama's gun-toting thugs [Oh, No?], or that an expat gets his marching orders.[Definitely not!] It's about people like Imrana Jalal and her husband Ratu Sakiusa Tuisolia."

And the rest of his long story is about these "best people" and a court case in which Jalal was acquitted.

His conclusion? "Going on holiday there while this sort of abuse is happening would be like sitting in a cafe sipping a coffee while a mugger attacked a pregnant woman on the footpath next to you, and you ignored it."

So, that's all for the moment from Rory Gibson, former editor-in-chief of the Fiji Times, defender of media freedom. One wonders what his journalist colleagues think about this.