Don't let the numbers get in the way of a good story, Fiji Sun 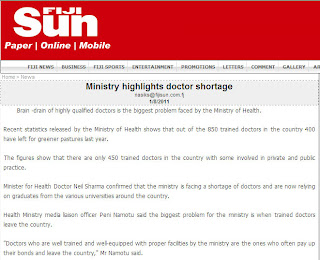 MORE from Croz Walsh, this time a scolding for the Fiji Sun for doing a hack job on an "exodus" of doctors. And more evidence on how many Pacific journalists - all over the globe, for that matter - are challenged when it comes to numeracy. Walsh writes the "botched figures" items:

You can't altogether blame the moderate anti-government blog Fiji Today for getting its facts wrong when it reported: "Recent statistics released by the Ministry of Health shows that out of the 850 trained doctors in the country 400 have left for greener pastures last year." They were merely quoting the Fiji Sun. But they said this equated to more than one doctor per day and really rubbed it in by adding "Good one, Frank. You are building a better Fiji." Click on both hyperlinks above to check that I've got this right, and then read on...

The figures they cite are completely wrong, and the journalists responsible have no good excuse because they should immediately have queried obviously suspicious figures and because there were quick ways to do so. I looked at the figures and thought 850 trained doctors? Fiji only has 8000 teachers and they can't possibly outnumber doctors by only 10:1.

So I checked the Bureau of Statistics website that showed there were only 416 doctors in 2009, and as a further check I consulted the Ministry of Health's website. Their Strategic Plan for 2011 states that it aims to maintain the number of doctors at 54 per 100,000 population. This would give 480 (not 850) doctors in an estimated 2010 population of 888,000. So the Fiji Sun and Fiji Today are way off the mark.

And then, incredibly, they made a second error by saying the loss of 400 doctors occurred in one year, when the figure is for the past 10 to 15 years, that gives a loss of between 40 to 27 doctors a year. Still a large number but locally graduating doctors and overseas recruitment should make up much of the loss.

I hope the Fiji Sun and Fiji Today editors blush with shame.

And give their reporters and subs an in-house statistics workshop.