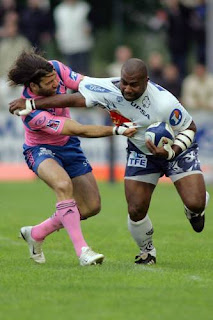 IN AN extraordinary development, the Fiji Rugby Union’s entire board is resigning next month in a funding scandal to clear the way for the military-backed regime to hand over threatened funding for the Rugby World Cup in New Zealand later this year.

The regime had threatened to withhold F$3 million in pledged grants for World Cup unless the board quit following an official probe by the consumer watchdog Commerce Commission had found the union had mismanaged a fundraising lottery.

Sport Minister Filip Bole said the RFU would elect new officials at a special general meeting before the end of February.

Meanwhile, a host of Fiji rugby players plying their trade in France have made a key contribution to the French clubs’ domination of the European competitions. At the start of this weekend, French clubs topped three of the six pools in the top-tier Heineken Cup while French clubs also headed all five pools in the second-tier Challenge Cup pools.

The article below from the Wall Street Journal sums up how “big money, star players and English tactics” have given French rugby unprecedented domination of global club rugby.

Pictured is Toulon's Gabriele Lovobalavu playing against Stade de France (taking on the opponent in pink). He was voted seventh on Rankopedia out of the top 11 Fiji players in France in the 2009 Top 14 competition. (Clermont Auvergne's Napolioni Nalaga was voted top Fiji player.)

Not so long ago, European rugby union was dominated by English teams whose gameplans involved kicking for field position and tackling anything that moved. But not anymore.

In today's club game, the best teams have three things in common: star-studded rosters, a swarming defense, and they all play in France.

Between them, French clubs provided four of the eight quarterfinalists in the Heineken Cup last season—a record—as Toulouse won its fourth title. Nobody else has more than two.

This week, as club rugby's biggest tournament resumes, French teams top three of the six pools in the Heineken Cup and five out of five in the Challenge Cup. In European competition this season, clubs from the country's Top 14, the top division, have a combined winning percentage of .707 and a record of 41 wins, one draw and just 16 defeats.

It's a period of unprecedented dominance, but will it last? The French say the commercial clout of their clubs and the passion for the game will sustain it. But spiralling salaries and a new homegrown player quota instituted by the Ligue Nationale de Rugby, which governs the professional game, could pull the country's soaring teams back down to earth.

Nevertheless, for the moment, France has stolen the game of club rugby from the rest of Europe and it doesn't look likely to give it back anytime soon.

"I don't know if it will right itself," said Jim Mallinder, the Northampton Saints director of rugby. "The gap is certainly there and it's quite evident. It has become increasingly difficult [to compete]."

It wasn't always like this. Though France supplied the Heineken Cup's first two winners—Toulouse and Brive—it couldn't maintain that dominance. Toulouse has won a further three titles, but no other French club has triumphed since 1997—a period in which four English clubs and all three participating Irish provinces lifted the trophy. In the 2008-09 season, France has just one representative in the Heineken Cup quarterfinals.

The chief reason for the turnaround is that French teams once famed for their flair have developed a reputation for discipline and punishing defense.

France has always produced players with the capacity to dazzle on a rugby field, but that style was rarely accompanied by steel. These days, that's changing. When London Saracens played Clermont Auvergne in a Heineken Cup game last October, for example, Clermont recorded 121 tackles to Saracens' 50 as the French team prevailed.

Indeed, there have been more tries on offer in the Aviva Premiership and the Magners League, with an average of 3.61 and 3.72 per game respectively, compared with 3.46 scored in the Top 14 so far this season. "The French teams have become more English in their approach," said Serge Blanco, the former France national team player and now president of Biarritz. "The Top 14 clubs now play a game that combines running rugby with disciplined defense. They've learned to be streetwise."

But for all their physical strength, French clubs owe much of their success to financial muscle. Armed with a rich domestic television deal and booming attendances, the Top 14 teams operate on an entirely different economic level to their cross-channel counterparts.

France introduced a salary cap of €8 million ($10.4 million) per club this year, a figure which dwarfs the wage ceiling of £4.2 million ($6.6 million) in the Premiership. In addition, salaries in French rugby have risen tenfold in the past 15 years. The average wage in the Top 14 is now €132,000—almost 60% higher than the Premiership average of roughly £75,000.

Combined with the strength of the euro against the pound, that purchasing power has made French clubs hugely competitive in the international transfer market. In the past two years, superstars like Francois Steyn, Carl Hayman and Jonny Wilkinson have all been recruited from overseas clubs.

The influx of big-name players has produced other advantages: In France, the average crowd for Top 14 matches this season is 13,493, an increase of 2.5% on last season. By contrast, figures released by Premier Rugby this week show that Magners League and Aviva Premiership attendances are down 7% and 4% respectively compared with the same stage last season.

"There are more people watching and more interest in the newspapers," said Philipe Saint-André, the Toulon coach. "It looks a little bit like the English Premier League."

French teams have also developed deeper reserves of talent. While Leicester Tigers, the English title-holder, named a squad of 33 players this season, clubs in the Top 14 can have as many as 45 players at their disposal. Clermont, the reigning Top 14 champion, included 30 international players in its nominated squad list of 38 for the current campaign.

All of which helps to explain how the French championship came to replace England's Premiership at the pinnacle of club rugby: Since Premiership clubs first participated in the Heineken Cup in 1997, England had always been represented in at least one European final. Last year, that sequence was broken during a dismal campaign as England provided just one quarterfinalist—its worst record in 13 years of continental competition.

Yet some people are starting to wonder whether French rugby's reign is built to last. Salaries in France have risen by roughly a third since 2007 and Mark McCafferty, the chief executive of England's Premier Rugby, warns that the level of spending is unsustainable.

"I don't think it's sustainable position, but it will take three, four more years to work its way through," McCafferty said.

The spiralling cost of competing has already claimed some casualties: Montauban was thrown out of the Top 14 last year and relegated to the amateur leagues after failing to provide evidence that it could clear a €1.7 million financial shortfall in its season budget.

If heavy spending doesn't tackle French dominance in Europe, new player quotas might. Starting this year, Top 14 clubs will have to increase the number of homegrown players in their squads to 50%, rising to 70% next season in an effort to safeguard the future of the national team. In addition, many clubs French clubs see the domestic championship—which dates back to 1892—as more important than the quest for European glory.

"For me, the Heineken Cup is not the priority," said Mourad Boudjellal, the Toulon president, ahead of his club's game against Munster on Sunday. "I am first a child of the [Top 14] championship."

But whatever the future holds for the rugby teams in France, the era of French superiority in Europe shows no sign of coming to an end just yet.

"The French teams are still the ones to beat," said Will Greenwood, a former England player and now a rugby analyst. "It's almost impossible to pick anyone else."