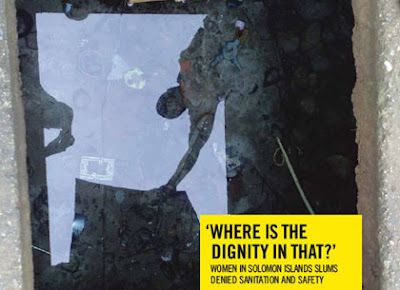 Peering into a contaminated water well: The Solomon Islands report on sanitation and safety in the Solomon Islands. Pictured below: Joycelyn Lai of the SI Young Women's Christian Association and the 20,000 signatures of the Amnesty International petition in support of Pacific women's human rights.

HARDLY surprising for the Pacific cynics. At the beginning of the Pacific Islands Forum week, Wadan Narsey warned in an article for Pacific Scoop about five "real" issues important to the region but unlikely to get too much attention in the Auckland 40th anniversary talkfest in the shadow of the World Cup. How right he was, by the end of the week many of the issues were still marginalised. Top of his list:

1. The liberation of West Papua: “It is a sad indictment of the past few years of PIF gatherings that 'Big Power Diplomacy' has emasculated the Forum Island Countries (FIC) from expressing their solidarity with the oppressed Melanesian people of West Papua.” Out of the 192-odd Forum accredited journalists, only three were present for a major public about the 'forgotten' issue with an outpouring from three West Papuan human rights activists.

3. Defence cooperation: No serious discussion about this topic, which involves a proposal for a surplus of Pacific islands labour being recruited for the Australian and NZ military forces and navy, especially Tuvaluans and i-Kiribati.

4. Ending rugby colonialism: For all the hype about the Rugby World Cup, there was previous little debate about a better deal for Pacific rugby in Fiji, Samoa and Tonga from the white-dominated Australia and NZ rugby administrations and governments. (Wouldn't it be a delight if Tonga actually beat the All Blacks like Samoa dealt to Australia in July).

“But Canberra and Wellington don’t mind refusing visas to any rugby player related to anyone in the military regime [of Fiji]. Rugby in the Pacific is not just sports, but also part of the economy, and trade earning valuable foreign exchange. It could also become a great boost to Pacific tourism. But with lack of support from Canberra and Wellington, their rugby unions have let a great opportunity fort FICs go begging for more than a decade."

5. PACER Plus: “It is guaranteed that PACER Plus negotiations will drag on for years. Pacific Island politicians and civil servants won’t mind because they are guaranteed endless free trips to meetings and conferences, while endless compromises are sought on every little issue. Someone needs to do a PhD on the endless trivial negotiations over the dead PICTA horse.”

But as Nic Maclellan reported for Islands Business: “As leaders gather in Auckland there are serious obstacles to regional trade talks, including the resignation of Chief Trade Adviser Chris Noonan, allegations of Australian bullying over OCTA’s funding and a recommendation from Forum officials that leaders reject OCTA’s bid for observer status with the Forum.

"The OCTA (Office of the Chief Trade Adviser) crisis comes at the same time as political developments in Fiji complicate trade policy for the regional organisation.”

Languishing in the sidelines outside the shortlist of Dr Narsey – who incidentally was recently forced to step down from his economics professorship from the University of the South Pacific in scandalous circumstances after pressure from the Fiji regime over his outspokenness – was another thorny issue: the trampling of human rights of women and girls in the Pacific.

At the launching of Amnesty International’s report on the plight of women in the Solomon Islands “Where is the dignity in that?” before a packed audience at AUT University, there was no journalist to be seen. Wrong. Two you 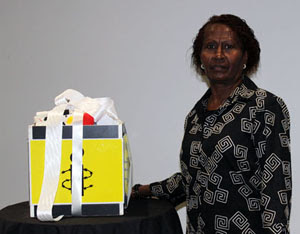 ng journalists were actually there - Victoria Young attached to the Pacific Media Centre, who wrote an excellent article, and a Nigerian male journalist Myles Idoko Ojabo, who also filed a good piece. Some comments from the address by Amnesty International Aotearoa’s chief executive Patrick Holmes are worth noting here:

The issue of violence against women in the Pacific is a human rights issue of epic proportions and the need to address it is urgent. As leaders meet for the Forum leaders’ meeting in Auckland this week, daughters, sisters, mothers and wives continue to be beaten, raped and killed. Many of the accounts that Amnesty International has received are truely horrific and yet so often the issue does not make headlines. This violence is not only a reality; it is our reality and it is one we all have a responsibility to address.

Simply put, it is not illegal for men to rape their wives. In Papua New Guinea cultural practices such as bride prices, polygamy and sorcery all serve to deepen the discrimination and violence felt by women. If you are considered a piece of property, it is very difficult to instil the understanding that you have rights, that you are part of the fabric of humanity. But this understanding is not impossible to achieve. While the issue is complex and at times seems overwhelming, effective legal protection for women can be achieved.

The reality is that violence against women in the region is rife with some nations having the worst rates out of any country on earth. On average two out of every three Pacific women have suffered abuse. In Kiribati 68 percent of women have been abused and violence against women in the Marshall Islands has been reported to be at almost 90 percent. With figures such as these, it is sadly unsurprising that sexual and gender based violence is considered standard practice by many in the region.

Amnesty International has statistics from a recent survey in Samoa showing that 85 percent of women who had been abused never asked any formal agency for help. Of these, the same percentage failed to do so because they thought such abuse was the “norm”, or “not serious enough”.
...
In recent years some small progress has been made. In Cairn’s in 2009 at the Pacific Island Forum leaders’ meeting, Pacific leaders recognised gender-based violence as a risk to human security and a potential destabilising factor for communities and societies alike. In a milestone decision for Pacific women, Pacific leaders pledged to take action to eradicate sexual and gender based violence.

For the first time in 40 years, the widespread issue of violence against women in the region was taken seriously by Pacific leaders. In 2010 in Vanuatu Pacific leaders commended actions in the region to take forward the directions from Cairns and acknowledged the initiative of the Forum Regional Security Committee to establish a Reference Group on sexual and gender based violence to support the Forum Secretariat and national efforts to address the issue.
Since then, the Reference Group has met in Fiji and conducted country visits to Tonga and the Solomon Islands; meeting with a range of stake holders and interest groups.

But these promises, policies and draft bills, while significant for setting the foundations to address the issue, nevertheless, do nothing to protect Pacific women and their families from violence.

In Amnesty International’s largest petition ever in New Zealand, well over 20,000 individuals have called on Pacific leaders to: make their country a safe and secure place for women and their families; to put in place laws to prevent violence, punish offenders, and compensate survivors; and to sign, ratify and put into practice international human rights conventions that protect women from violence.