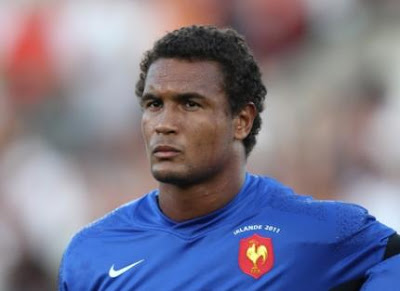 Thierry Dusautoir ... beat the All Blacks in New Zealand in 2009 in his first match as France captain. Photo: L'Êquipe

THIERRY DUSAUTOIR comes across as the mild-mannered type, softly spoken to the point of being shy when he's outside the playing arena.

Then there's Dusautoir the France captain, who morphs into the ferocious tackling flanker when he enters the field of play and ensures that his actions speak louder than words.

"Before a match, I think about the battles ahead, the rhythm," he told sports daily L'Êquipe in a recent interview. "I expect my head to spin, my heart to beat at 2,000, to no longer know where I am."

One of the rare times he has taken a public stand was in defence of Marc Lièvremont when the France coach came in for brutal criticism following a defeat to Italy in the Six Nations championship in March.

With voices of discontent growing louder and louder, as the domestic media criticised Lièvremont, and as rumours abounded that there were rifts forming within the French camp, Dusautoir knew it was time to show his colours.

He rallied the players behind the coach, and they've patched up their differences and now are focused on the World Cup.

"I think we can go far. The most important factor will be how we go about making this tournament our own, so we have no regrets afterwards," Dusautoir said. "The team will become like a substitute family. In a way that's good, because it will bring the squad closer together."

Improving form
France won its two warmup matches against Ireland, 19-12 in Bordeaux, and 26-22 in Dublin, and Dusautoir is optimistic that the team's form is improving.

"We're going to get better and better," Dusautoir said. "It's good to see where we stood with regards to Ireland. We know what we need to work on to improve."

The 29-year-old Dusautoir has won 44 caps since making his debut against Romania five years ago, and is widely respected on the international scene.

In June 2009, he guided France to its first win on New Zealand soil since 1994, and to an impressive home victory against World Cup champion South Africa. A year later, he led France to the Six Nations title and the Grand Slam.

But all that came after Dusautoir truly made his mark, on a special night in Cardiff during the last World Cup.

Dusautoir, who was only called up to the 2007 World Cup squad as a replacement for Elvis Vermeulen, stood out by making more than 30 tackles against the All Blacks and scoring a decisive try as France rallied to win an epic contest 20-18.

"We were on another level during that match," said Dusautoir, who grew up learning judo.

Dusautoir waited until he had completed his studies in chemical engineering before playing rugby full-time for Biarritz in 2004. He was soon scaring even the most intimidating opponents in French rugby.

Fabien Pelous, France's all-time record-holder for appearances with 118 caps, recalls being on the receiving end of one of Dusautoir's huge hits during a French league match.

"I remember a tackle that hurt me. He was playing for Biarritz, I didn't know who he was," Pelous said. "When he signed for (Toulouse) I was happy because he's a player you would rather have with you than against you."

While he's earned the respect of everyone in the domestic league, he's determined to expand on that at the World Cup, where he's hoping to become the first France captain to win the trophy.

"New Zealand is the motherland of rugby," he said. "The team that manages to become world champion over there, that manages to win on All Blacks soil, will gain more respect than all of those who came before them."

Jerome Pugmire is a journalist with the Associated Press.