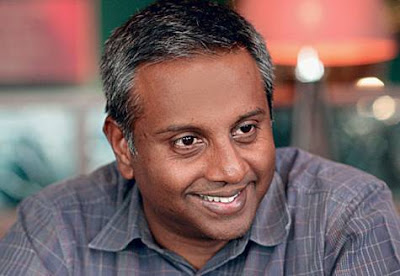 SALIL SHETTY, secretary-general of Amnesty International, has been an outspoken advocate for the Global South who doesn't pull punches. He has travelled extensively in his first year since taking the helm of the international human rights group and has put priority on building globall grassroots links and has paid close attention to the Arab Spring. He stewardship is a refreshing era. It isn't surprising given his own role as former director of the United Nations Millennium Programme where he campaigned against poverty and his earlier background in Bangalore, India: "With his mother active in women’s groups and his [journalist] father with the Dalit movement, his home became a hub for local and national activists. Since his student days, when a state of emergency was declared in 1976, and as the president of his college student’s union, Salil Shetty has been actively campaigning against the curtailment of human rights."

Now his attention is currently on Downunder. He has already rapped Australia over its own human rights record, especially over asylum seekers, and he will be in New Zealand tomorrow. This is what he had to say about Australia in the ABC's Nightline interview:

The chief of Amnesty International says Australia's treatment of asylum seekers and Indigenous people is deeply disturbing and an international embarrassment.

In his first interview while in Australia, Amnesty secretary-general Salil Shetty told ABC's Lateline that Western nations, including Australia, were rapidly losing credibility when it came to human rights.

He says the Federal government's stymied Malaysia Solution is not in line with international refugee laws.

"Australia should know better," he said. "It is simply not acceptable because they are very familiar with what is acceptable legally and what is not.

"There is a legal side and also a humane side.

"I don't believe it is in consonance with Australian people's values either. I think it is wrong on all counts."

Shetty says it breaches the Racial Discrimination Act, and talks down to Indigenous people.

"That is the other blight on the otherwise decent human rights record and we are talking about a half a million people," he said.

"Sometimes people think that we are talking about a handful of people, but if you look at the current practices and policies in the Northern Territory what it is doing effectively is widening the gap, not closing the gap."

After visiting remote Indigenous communities and a detention centre, Shetty will meet Foreign Affairs Minister Kevin Rudd and other politicians in a fortnight.

"This is a very critical moment ... on the issue of asylum seekers and the issue in the way in which they are addressing the Aboriginal people's problems. They have to really raise the game and meet their international obligations," he said.

Shetty says it is one thing to meet and speak with a politician, the question he asks is what will they do with the information.

Criticism of the West
Shetty also warns Western countries to stop lecturing other failing countries and acting as the world's sheriffs or deputy sheriff.

"If they are going to be lecturing people that have to shape up domestically and in their foreign policies, it is a kind of shape up or shut up message," he said.

The West is already under fire for its inconsistent response to the current turmoil in the Middle East and North Africa.

Shetty says the international action in Libya has not been matched in the troubled countries of Yemen, Bahrain and Syria.

"Cosying up to [Moamar] Gaddafi but also cosying up to [Hosni] Mubarak before that, but I mean [Zine El Abidine] Ben Ali - there was this American sort of thing: 'he might be a son of a bitch, but he is our son of a bitch' kind of thing," he said.

"The people in the Middle East and North Africa and indeed in many developing countries look at all of these interventions with a great deal of suspicion."

Amnesty's chief also points to other areas as worrying: the use of the death penalty in the United States, most recently the execution of Troy Davis, and the US use of torture in the war on terrorism.

"This is simply unacceptable and this is where the issue of double standards and hypocrisy really starts to show up," he said.