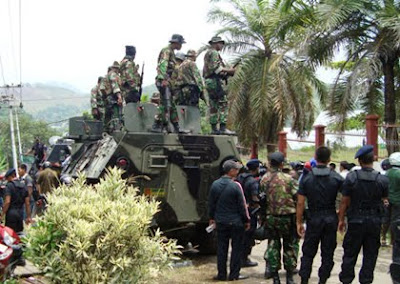 FOUR KILLINGS at the Freeport McMoRan copper mine strike last week, protests by journalists after one was beaten up and this week’s opening fire by Indonesian forces at the Third Papuan People's Congress have put the spotlight on media freedom and freedom of expression in West Papua. A new report published yesterday by Pacific Journalism Review examines media freedom across the South Pacific and it is grim reading. Amid the confusion and chaos in Jayapura this week, reports are emerging in West Papua Media, Pacific Scoop and other news sources of a growing toll from this repressive crackdown. Here is a dispatch from Jayapura by Jakarta Globe reporters Banjir Ambarita, Markus Junianto Sihaloho and Ezra Sihite in Jajapura:

Six people have been found dead a day after Indonesian security forces fired shots while breaking up a pro-independence rally in Papua, a human rights advocate reported.

The bodies of two of the dead, identified as university student Matias Maidepa and Papua Land Defenders member Yacop Sabonsaba, were found on Wednesday behind the military headquarters in Padang Bulan, Abepura.

“On October 20, 2011, four civilians were also found dead around the venue of the Papua Congress, but their identities remain unknown,” said Matias Murib, deputy chairman of the Papua office of the National Commission for Human Rights (Komnas HAM).

Some 300 people were detained by the Papua police, though many of them had nothing to do with the demonstration held in a field in Padang Bulan, Matias said.

“Many among the hundreds of people detained were not involved in the congress, and only happened to by passing by the area when they were arrested,” he said.

He added that he had received reports that hundreds of armed soldiers and police were out in force on the streets of Manokwari, some 740 km west of Jayapura, the Papua capital.

He cited an unconfirmed report that a man identified as Martinus Yeimo had been killed by a member of the police’s Mobile Brigade (Brimob) in Enarotali, a town in Paniai district….

[Police chief] Wachyono said Selfius Bobby, a social media activist and organiser of the Papua Congress, had been arrested, bringing the number of accused over the rally to six.

Police have said all six accused would face charges of violating articles 110, 106 and 160 of the Criminal Code.

Besides Selfius, the other accused are Forkorus Yoboisembut, chairman of the Papuan Customary Council and declared president of the Democratic Republic of Papua at the congress, Edison Gladius Waromi, his prime minister, August Makbrawen Sananay Kraar, Dominikus Sorabut and Gat Wenda.