AT THE heart of a global crisis over news media credibility and trust has been Britain's so-called Hackgate scandal involving allegations of phone-hacking and corruption against the now defunct Rupert Murdoch tabloid newspaper News of the World.

Major inquiries on media ethics, professionalism and accountability have been examining the press in Australia, Britain and NZ over the past two years.

The Murdoch media empire has stretched into the South Pacific with the sale of one major title being forced by political pressure.

The role of news media in global South nations and the declining credibility of some sectors of the developed world's Fourth Estate also pose challenges for the future of democracy.

Truth, censorship, ethics and corporate integrity are increasingly critical issues in the digital age for a region faced with coups, conflicts and human rights violations, such as in West Papua. 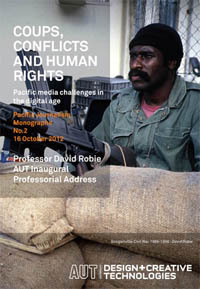 Dr Robie reflects on the challenges in the context of the political economy of the media and journalism education in the Asia-Pacific region.

The speech was given on 16 October 2012 and this is a new AUT video of the event posted on YouTube this week.