An update on Ces Oreña-Drilon and the Maguindanao massacre investigation. Her justice corruption allegations have led to a National Bureau of Investigation inquiry. Video: GMA News

PACIFIC JOURNALISM REVIEW, the only politics and media research journal in New Zealand and the Pacific, will host an international conference late next month marking its 20th anniversary of publication.

With the overall theme of “Political journalism in the Asia-Pacific”, many editors, investigative journalists, documentary makers, human rights advocates, media freedom activists and journalism educators and researchers will be converging on Auckland for the event at AUT University on November 27-29.

One of the keynote speakers at PJR2014, television journalist Ces Oreña-Drilon of ABS-CBN and an anchor for the celebrated current affairs programme Bandila, will give an address on the killings of journalists with impunity in the Philippines.

She has been investigating the 2009 massacre of 34 journalists by private militia while they were accompanying a candidate’s entourage to register for elections and she has a grim story to tell in her “Losing the landmark Maguindanao massacre case” presentation about the legal and political fallout from the tragedy.

She is attending the conference with the support of the Asia New Zealand Foundation.


Another guest speaker, Max Stahl, from Timor-Leste will be speaking about how his documentary making and socio-political video histories have contributed to the development of an Asia-Pacific nation.

Ricardo Morris, editor of the two-year-old Repúblika magazine that made such a fine contribution in last month’s back-to-democracy Fiji elections, will also be speaking. Several media academics will also be presenting research papers about the Fiji elections.

Several of the journal’s leading editors and investigators, including Frontline editor and investigative journalist Professor Wendy Bacon,  will be there presenting on topics as wide-ranging as the failure of the “Pacific solution” over asylum seekers, the emerging Australian “secret state” and the impact of Māori social media.

The conference is being organised by AUT's Pacific Media Centre. 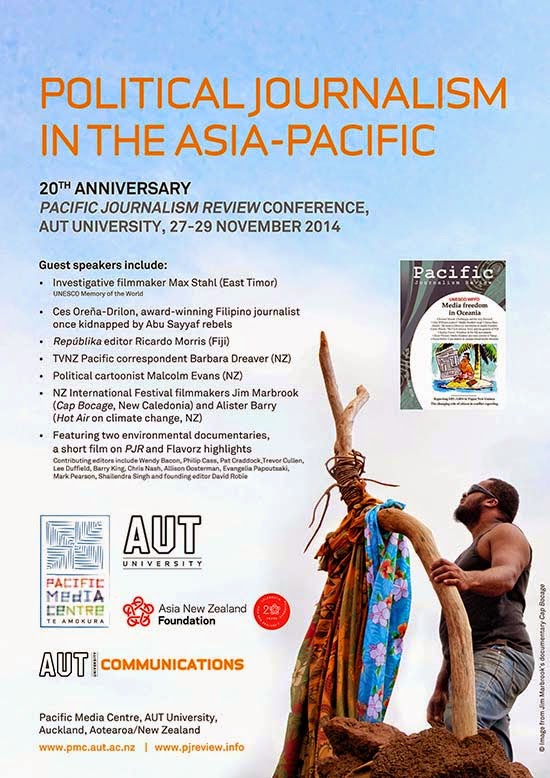