More than 200 people have protested in downtown Auckland 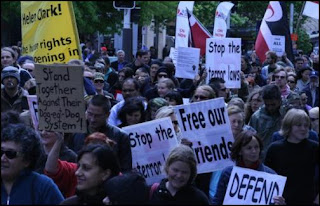 on Saturday over this week's controversial dawn raids in New Zealand and the arrest of some 17 activists. The protesters condemned the police actions and ridiculed the country's proposed new terror laws. Scoop's Joe Barratt reported: "Showing a unified front, the protest was attended by a wide range of activist groups, and also included family and friends of the accused. But for many there is also the larger fear of what the arrests represent, and of what could happen if the legislation amending the Terrorism Suppression Act of 2002 currently before Parliament is passed."

Leading Tuhoe activist and campaigner Tame Iti (right) was among the 17 arrested, as police swept Maori sovereignty, peace and environmental activist groups. Tuhoe people accused the police of terrorising an entire community with heavily armed raids and by boarding school buses. The Tuhoe tribe never signed the Treaty of Waitangi and has a long history of resistance for their tangata whenua rights against colonial and state rule. The police raids follow international pressures for New Zealand to adhere to the Declaration on the Rights of Indigenous Peoples. New Zealand was one of four countries that voted against the UN Declaration, along with the US, Canada and Australia. Mainstream media have been accused of being one-sided.

Former Listener editor Finlay Macdonald, writing in his weekly Sunday Star-Times column "Law of the jungle" , said: "Once again, the interests of national security trump those of open justice. Public scepticism quite reasonably grows. Last week's raids and arrests were conducted under both normal criminal law as well as the Terrorism Suppression Act, although no actual charges have been laid under the latter. The question has to be what distinguishes these alleged offences from any ordinary criminal or conspiracy case? As ever with issues such as these, we are implicitly asked to take the authorities on trust. Unfortunately, recent experience only encourages cynicism."
A Defend Civil Rights website has been established.
Auckland protest photo by Joe Barratt.
Posted by café pacific at 4:34 PM