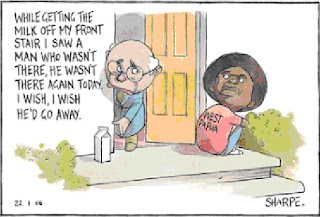 Good to see PNG's new National Capital District governor Powes Parkop having a crack at the local media for its appalling job in recent times at covering the plight of their 'bros across the border in Indonesian-controlled Papua. The issue of 10,000 or so displaced West Papuans and their requests remains a festering sore. And the PNG media haven't done enough to address the problem and ensure it is on the agenda for weak-kneed politicians. Ironical, because there are many influential Papuan journalists in the PNG media industry and in the past they have prodded local newspapers, radio and TV into keeping an eye on the Papuan problem. Powes always supported the Papuans in their struggle for self-determination right from his Melanesian Solidarity activist and human rights legal work days. Now we wish him luck in the to job at NCD. He took advantage of the launching of PNG's 'Let's do it' media expo 2007 to slam the media for accepting Papua as a "taboo" topic. He wasn't too full of platitudes about the coverage of the decade-long war on Bougainville, which ended in 1997, either. Parkop said he couldn't recall when journalists had tried to report the Papuan story on the other side of the border without Indonesian thought police. He said: The media seems to have swallowed the political line that West Papua is part of Indonesia and whatever is happening there is a matter for Indonesia ... It seems that as far as the media is concerned, West Papua is A TABOO . It's a domestic affair similar to how we treat domestic violence.
Cartoon: Sharpe's view of John Howard's closed door attitude to West Papua - it could easily apply to the PNG media attitude to Papua.
Posted by café pacific at 4:22 PM

hi....
from west papua for you
and we say thanks for your standing up for west papua