Farewell Ka Bel - a hero of the working class 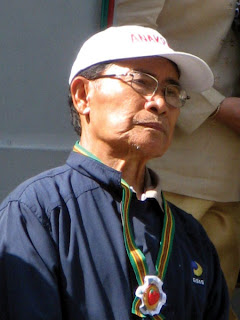 "HE HAD wanted to die 'in the streets', says the Philippine Daily Inquirer, "that is, in the act of principled protest, deep in the trenches of a never-ending war against injustice. Instead, progressive Congressman Crispin "Ka Bel" Beltran died after falling off the roof of his modest, mortgaged house, in the act of tending to his family's needs. He was trying to fix the roof before the rains fell." It was a shock when his death came to the many activists, civil society advocates, democrats and journalists in the Philippines, New Zealand and the world who were inspired by his life of integrity.

The Inquirer added:
It may not have been a hero's death, but it was still a virtuous one, with a timeless lesson in personal integrity. It showed an astonished nation that it is possible to remain poor while serving in Congress, despite the trappings, the generous staffing budgets, the access to pork barrel funds. Despite all that, the 75-year-old Beltran remained a member of the working class he represented. 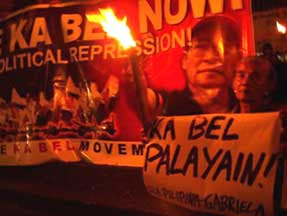 detained in 2006 amid a crackdown on progressive politicians, human rights campaigners, unionists, journalists and religious leaders. The congressman was arrested on charges dating back to the era of Filipino dictator Ferdinand Marcos in the early 1980s and were quashed in 1988. Since then, further trumped up charges of sedition were laid. Beltran had been held under hospital detention for sixteen months but an international campaign succeeded in setting him free.

A statement by the Auckland-based Indonesia Human Rights Committee said:
The Indonesia Human Rights Committee takes a close interest in the human rights and justice issues in the Asia-Pacific region.
We therefore mourn the loss of Congressman Crispin Beltran “Ka Bel”, a great man and an exemplary leader, with his family, his friends and the Filipino people. His untimely death is a great loss to all freedom-loving citizens. His life is a concrete example of the struggles ordinary people wanting to have a better and decent life.
Ka Bel had a very challenging and colourful life. From the Marcos martial law to Arroyo’s ‘undeclared martial law’ he never stopped fighting for the poor people. He was a true defender of the workers, peasants, urban poor and other marginalised sectors of the toiling masses. He was also a staunch critic of privatisation, deregulation and other destructive policies of globalisation.
His speech in the plenary after he was freed by the Arroyo government sums up well the kind of man he was. He said: "I am innocent of the rebellion charge against me. It's neither a sin nor against the law to speak against graft and corruption and the killing of hundreds of innocent civilians.”
Not only was he involved in national politics but also in international issues. Ka Bel also stood against the United States' war of aggression on Iraq and its war on terror. He was steadfast in his call for respect for national sovereignty and international unity against foreign intervention.
As a parliamentarian, he was incorruptible and stood for his principles. In his three terms in Congress he was awarded the Filipino of the Year and Most Outstanding Congressman honours for four consecutive years from 2002 – 2005. In 2006 was judged part of the Congressional Hall of Fame.
One of his famous quotes was: "If helping the poor is a crime, and fighting for freedom is rebellion, then I plead guilty as charged."
His sister Gerodia Beltran-Mirafuentes said: “He was a politician of the poor. He died a poor man.”