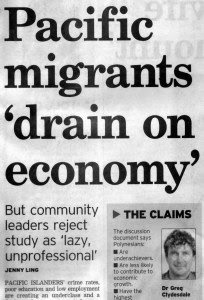 New Zealand's Race Relations Commissioner, Joris de Bres, plans a closer examination of the issues raised by Massey University economist Dr Greg Clydesdale’s widely condemned report alleging Pacific migrants are becoming an underclass in New Zealand. De Bres has convened a meeting of Pacific community representatives, academics and government policy analysts to discuss the report, which has stirred up a hornet's nest of controversy. Critics have lambasted Clydesdale over the lack of rigour and "racism" of his report. In his defence, Clydesdale has condemned "political correctness bullying" and - disturbingly - made allegations about unethical distortions by some named journalists. He claims in a message circulated to media criticising lack of media resonsibility that "it is obvious that the Dominion Post deliberately sensationalised my paper". For example, he claims he never said Polynesians were "a drain on the economy", as reported in Islands Business and many other media following The Dominion Post. He concludes:
I have had far more respect from Polynesians on this issue than the journalists (and many Kiwi-Polynesians actually supported me). If I was not writing an article on economic grounds, I would welcome more Polynesians and deport half the journalists.
De Bres says the report has caused "significant hurt" to Pacific communities and fuelled the venting of prejudice on the internet and talkback radio. But the right-wing blogs haven't had it all their own way. There has been some searing analysis of Clydesdale's research claims. In a satirical piece at Huia, titled "A little leeching and mooching from the underclass", Karlo Mila commented:
It’s hard work being a drain on the economy of New Zealand. But then someone’s got to do it and why not an ethnic minority? I woke up this morning and pondered on just how to suck the blood of the nation and simultaneously render myself devoid of any innovation – living out the 'lifestyle choice' of the Polynesian underclass I belong to – and the lifestyle that my children will default to (the research says so!!!)

Grumpy Old Geezers blog described the Clydesdale report as "clumsy as a heavy horse", saying:
... if you give a lot of money to a flaky Massey University research project, release the results to a bunch of semi-conscious journalists who are having a slack news night at the Dominion Post, then add a dramatic front-page headline written by a Qantas Award winner for headline-writing, you get something that reinforces racist, xenophobic social stereotypes and helps absolutely nobody.
The consensus from the Pacific community meeting convened by the HRC was that the contribution of Pacific Islanders’ to the New Zealand economy and society has been more positive. The meeting encouraged de Bres to invite submissions on the report to create a "broader, well-informed basis" for discussing the issues.

Hi David, It looked to me like NZPA beat the story up. Do you happen to have a copy of the conference paper that gave rise to the uproar in the first place? Blogged on this myself.