Giving the Pacific press predators a taste of their own medicine 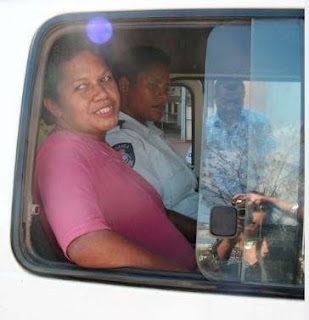 It took a while - and some fairly barbed promptings from annoyed journos over at the PIJO google group - but eventually PINA awoke from its slumber and slammed the latest act of censorship by the regime against the media. But this apparently isn't enough for some of the irked scribes who reckon the Pacific media is under the biggest threat to its freedom since, well, forever! So PINA dissidents sparked by the tireless energy and inspiration of Jason Brown and others have come up with their own ginger group, Pacific Freedom Forum. A statement was widely distributed, including on Malia Sio's Pcfjrno's webblog. The idea is for this group to not muck around waiting for some politically correct statements from PINA - if a statement even gets out - but to act promptly next time somebody like Fiji Times reporter Serafina Silaitoga (pictured) gets hauled in by Big Brother. They want to get in smartly to put the squeeze on Pacific press predators. One amusing statement from the new chair of PFF was a gentle poke in the direction of Pacific Media Watch, which has been keeping an incisive eye on the region's media for 12 years or so - in fact, since the 'Tongan three' were tossed in the slammer for "contempt of Parliament". (The jailing was ruled by the Supreme Court to be an illegal act and Kalafi Moala, pro-democracy MP and publisher 'Akilisi Pohiva, and Taimi 'o Tonga subeditor Filokalafi 'Akau'ola were set free). Susuve Laumaea said:

"There's something else that keeps making noises out there and purports to represent the same - or almost the same - agenda PFF is pursuing. It's called Pacific Media Watch."
Actually, not correct. As co-founder of Pacific Media Watch with Peter Cronau in 1996, I stress that our initial objective was to start developing a media freedom resource for the region at the University of Technology, Sydney, and our first campaign was in support of Kalafi and co. (a petition of more than 100 journos around the Pacific called for their release). Since then, PMW established a website on c2o community server in Sydney (no longer updated since April 2008) and the entirely voluntary service has now been taken over by AUT University to develop as a DSpace digital archive. This collection is being expanded to include audio, video files, Pacific media theses, book chapters and regional media documents and resources - all available free on a creative commons licence. An ideal resource for j-schools. More than 5000 files are part of this archive and are in the process of being loaded. In other words PFF and PMW have quite different briefs - but complementary in the struggle against the predators. Good luck to both!
Sifting through all the rhetoric over the Fiji media issue, University of the South Pacific's Shailendra Singh has produced the most thoughtful piece - an overview of a history of repression against the scribes. Bainimarama's crowd is just the latest bunch of authoritarian gatekeepers and certainly not the most sophisticated.
Posted by café pacific at 1:10 AM