Last word on a tired controversy 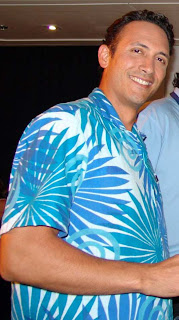 Over at the PIMA.Nius google group, the Clydesdale controversy that stirred up such a fuss in May has been dubbed the "heavy horse" saga. Cafe Pacific hasn't bothered to focus much on this issue as the Clydesdale report was so far off the wall - and never deserved the media beat-up that it got in the first place. But it is good that the Human Rights Commission report this week has finally cleared the air. Here is Aaron Taouma's take on the affair:

Today was the end of the "Heavy Horse" saga or so I thought.
The New Zealand Diversity Forum 2008 ended with the presentation of a report back to the community from the Human Rights Commission and delivered by Race Relations Commissioner Joris de Bres.
The report entitled Pacific Peoples in New Zealand was commissioned in response to the events surrounding the release of Massey University lecturer Dr Greg Clydesdale's discussion paper and the subsequent frontpage publication on 20 May 2008 by the Dominion Post of parts of that paper.
The purpose of the review was to look into:

All this for a mere five paragraphs and a table. That's how much the commission says Clydesdale actually wrote specifically about Pacific peoples in his "report".
In fact, according to the commission, Clydesdale's press release to the media (which got everything going in the first place) was practically everything said in the paper itself – everything about Polynesian immigration that is.
In a 25-page report, supposedly about New Zealand immigration policies, five paragraphs and a table were presented about Polynesian immigration; yet it is this that he sent to the media. Question mark, here = ?
Thus the resultant headline (which I won't even mention because it was so ridiculous), the spun story and the explosion of bigotry that followed (in online blogs, forums and probably in people's bedrooms).
The commission's report outlines the Pacific community response as being, um "angry" and "dismayed." Ah, yeah. But anyway, more to that, it imparts several responses elucidating exactly why the Pacific community was angry, dismayed and pissed off (that's not from the report).
Not that it's just an emotive response. The Clydesdale discussion paper was poorly researched and poorly written. That's quite obvious. The Dom should have done more research into who was sending them a press release, how much credibility that person had and if the claims made in the release were in fact true.
The same goes for Massey University and their claims to uphold academic freedoms and freedoms of speech.
The amazing thing here is that it's not the first time Clydesdale has made statements against "Polynesian immigration" (mostly in The Press) and clearly he has an issue with it. A "race-based" issue.
I commend the commission, and in particular Joris de Bres, for taking up this review and for the thoughtful, well-researched and organised report that has been produced. But really, why on earth do we have to justify, argue and explain these things?

Meanwhile, there was some good stuff at the Media Diversity Forum with an intriguing range of voices - some recorded by Aaron Taouma for the Pacific Media Centre - and speakers such as Arlene Morgan, from the Columbia School of Journalism, and Tagata Pasifika's Taualeo’o Stephen Stehlin calling for a two-way "conversation" with the Pacific.

hmm I wouldn't call Aaron Taouma a credible authority on anything Pacific!

Hey Anonymous - Aaron is the best. So, what do you know...