Up close and personal with a Subic tiger (or two) 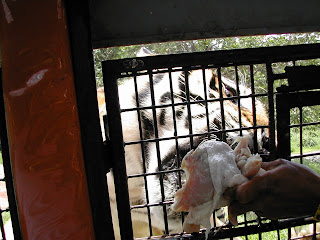 After the angry rumblings over Anwar Ibrahim's sudden arrest in Malaysia over more trumped up politically-inspired allegations (a celebrated speaker at last year's AMIC in Singapore, he was freed before delegates had time to issue a protest) and sessions on regional abuse of media freedom, the conference wound down with a series of R & R visits outside Manila. I chose Subic Bay Freeport to check out the development given that 19 years ago I was a journalist covering the international Peace Brigade protests about US presence at Subic and at the Clark Air Base. It's certainly an extraordinary and controversial attempt to turn a military base through "volunteerism"into a tax 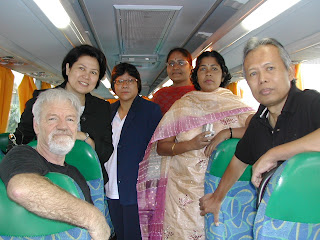 and duty free zone like Hongkong or Singapore. Former colonial power Spain established an arsenal and ship-repair facility at Subic Bay in 1885. But the US took over after the Spanish-American War and turned Subic Bay into a US Navy and Marine base. It was critically important during the Vietnam War as the base of the Seventh Fleet. After protacted protests after the ousting of Marcos, the Philippine Senate finally rejected US terms for extending the lease of the base. Sadly, the memorial outside the SDF headquarters honouring the 12 senators who were key to giving the US the boot from the base has been poorly maintained. Four of the plaques have vanished altogether. The last US warship, USS Belleau Wood, slipped out of Subic Bay on November 24, 1992. Most interesting for my visit was the nature and marine parks that have been created. A minor drama for our small AMIC group was feeding a couple of aggressive tigers in the "tiger safari" park. We were well-protected, of course. Instead of humans visiting the zoo, it was more like tigers being up close and personal with humans inside caged vehicles.
Pictured include Pacific Media Centre director David Robie, Angie Chew of AMIC (rear) and Zulkarimein Nasution of Universitas Indonesia (right).