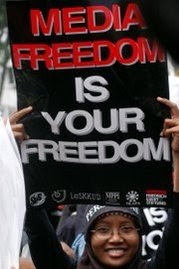 PETER CRONAU, one of the co-founders of Pacific Media Watch, has just done an interview with PMW's Josephine Latu about the state of media freedom in the Pacific 12 years on since the group's campaign to free Kalafi Moala from jail. (Moala was imprisoned unconstitutionally for contempt of Parliament). Cronau is busy writing a new book about East Timor and the case of the Balibo Five, the shameful murder by the Indonesians of five Australian-based journalists (including a Kiwi) back in 1975. He and his ABC Four Corners team won a Gold Walkley in 2006 for their programme Stoking the Fires about the bitter post-independence political rivalries in East Timor. This book is certain to rock the media and political establishments in Canberra with its revelations.

While there have been a few hard-to-find improvements in media freedom over the past decade or so, Cronau warns newshounds not to sit on any Pacific laurels. Vigilance is the name of the game. Peter - at the time director of the Australian Centre for Independent Journalism (ACIJ) - and Café Pacific's David Robie - then head of journalism at the University of Papua New Guinea - founded PMW at a particularly rocky time 21 years after the Balibo massacre:

Persistence by some journalists ... saw them reporting the Indonesian preparations for the invasion - and six media workers [the sixth, Roger East, was executed later on Dili wharf] paid with their lives for reporting this truth.

I guess the lesson to take from the book is that like all freedoms, freedom of the press is lost unless guarded vigilantly. That's the essential reason we set up Pacific Media Watch in the first place.