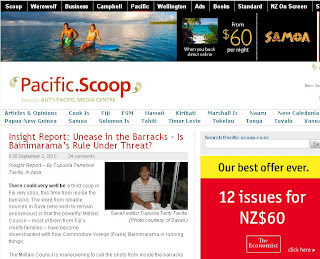 PACIFIC SCOOP has a well earned reputation for solid journalism. When it publishes opinions they are invariably reasoned and supported with evidence and insight. Until two days ago. When it published a purely speculative article (supported by not a shred of evidence or any indication of the reliability of unnamed sources) about a supposedly looming Fiji coup-within-the-coup.

The article was written by Tupuola Terrence Tavita, editor of the Samoa government newspaper Savali. It is not Tupuola's first trip into virtual space and I doubt it will be his last. Stories are easy to write when you can pull them out of the air. Investigative journalism takes longer.

I draw the article to readers' attention, not for its content, but for the flood of comments it generated. I urge you to read them by clicking here. At my last count, no one agreed with him.

The article does, however, raise the possibility of a coup-within-the-coup. This is nothing new. It has always been a possibility. Support for what the Fiji government is doing and trying to do seems to be increasing (see my blog) but Fiji remains a divided nation with enough "loose cannons" to cause immeasurable harm.

The longer overseas governments, most especially Australia and New Zealand, continue to act in ways that work against Fiji's economic recovery and internal stability -- and fail to support the government's much-needed reforms -- the longer the possibility of another coup will last. This prospect should cause Australia and NZ serious reflection: if the 2006 coup is unable to establish the conditions for long-term stability, it will not be Fiji's last coup, not by a long chalk. As one reader observed:

The next coup d’etat will sink the Ship and all of those on board. Without a shadow of a doubt. It will be violent and many people will be killed. That is what the International Community’s fiddling and stand-off is bringing on.

Mr Walsh
You remain confused. Or are you in denial? Australia and NZ do support the legitimate elected government of Fiji - what they don't support is the military junta who deposed it at the point of a gun. They are two different things.
Hope this helps your confusion.

Oh for goodness sake, I suppose you'll blame Canberra and Wellington for the next cyclone at this rate!

Simply pretending that anything that happens in Fiji is somehow caused by Australia and New Zealand robs Fiji people of any standing as autonomous decision making individuals.

It's as if they are to be treated as amoebas, operating on a simple stimulus-response basis, entirely dependent on external stimuli.

It's actually rather patronising to suggest that Fiji citizens have no responsibility for their choices and actions.