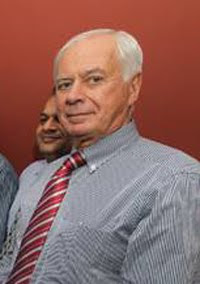 DALLAS SWINSTEAD, Motibhai’s new broom as publisher of the 141-year-old Fiji Times, didn’t waste any time setting the benchmark this week at his old paper. He has returned to Fiji with an open mind. He says he remains committed to good journalism and wants to rebuild the newspaper into the fine publication it has been. But he will also be “pragmatic” about the military-backed regime.

Swinstead believes there are more subtle and strategic ways of achieving success at the newspaper than pointless confrontation that killed the paper off for News Ltd: "What’s the point in having a newspaper shut down?” he asked Geraldine Coutts in an interview with Radio Australia’s Pacific Beat this week.

Thankfully, Fiji’s oldest and most influential newspaper survived the doomsday predictions with the enforced sale. Some journalists seem to think that it is a badge of honour to be kicked out of a country or for their title to be closed down. The ultimate censure. And the price then is enforced silence or rumour mongering for the citizens. Everybody loses.

After such an important contribution to the country from humble beginnings in Levuka in 1869 and to the building of a society both before and post-independence, it would have been “unthinkable” for the Times not to continue, as Motibhai’s board chairman Mahendra “Mac” Patel put it. Patel knew Swinstead from his first term as Fiji Times publisher (when he was very innovative) for four years until 1980, long before Sitiveni Rabuka’s twin coups threw Fiji into a downward spiral. Swinstead has a diplomatic streak and he may prove to be more adept at negotiating an “open space” with the regime than his predecessors.

It is early days yet, and for the moment Swinstead is saddled with the same editor-in-chief, Netani Rika, who is very unpopular with the regime. Will he remain for the long haul? Unlikely.

The handover at The Fiji Times in Suva this week was fairly upbeat with optimistic rhetoric from both the outgoing owner, News Ltd’s chairman and chief executive John Hartigan, and the new owner, Motibhai's “Mac” Patel. Hartigan said: “Today is a very emotional day for me, for a lot of people in our country and elsewhere; we didn't want to sell the paper.” Patel said: "Fiji without the Fiji Times is unthinkable. Motibhai's acquisition is for the people of Fiji."

Swinstead gave some hints on his editorial philosophy for the challenging times ahead in the Pacific Beat interview - and he brushed off what he branded as a “dumb question” or two from Coutts.

Explaining his views, Swinstead told Coutts: “I understand the values and the responsibility enjoying the right to free speech and the cost of putting my foot in my mouth. So there are two ways to go here. One is to demand free speech and you can ask News Ltd about that. And the other is to try to work with the local ownership, with the people and with the government to get this country to where it wants to be. Now it sounds a bit precious, but that's the reality and I am a pragmatist."

Coutts responded that she wasn’t “quite sure what that actually says” and asked again whether he supported a status quo approach or a free press:

SWINSTEAD: No, what I said is that I understand free speech better than most and I understand its value, but here it is not possible under some circumstances. What you have to understand is that 95 percent of our paper - whether it is Fijians, Indians and whatever - is happening here. It's sport results, it's commerce … the whole thing. And inevitably there are going to be stories that will cause the government embarrassment and I hope to be able to find a way to negotiate with good people down there and people here who are somehow or other able to keep some conversation going. I make no promises, and if we have to close our mouths or be shut down, I have no option but to walk around it. Now that's pretty simple.

COUTTS: So if you get a directive not to do a certain story, you will abide by that?

SWINSTEAD: I beg your pardon?

COUTTS: If you get a directive from the government or the censors not to do a story that you think is important and in the public interest, you'll sit it on it yourself? You'll choose to do that? You'll censor yourself?

SWINSTEAD: Well, with respect to you, that is a pretty dumb question. Of course, I will. What's the point in having a newspaper shut down?

COUTTS: Well then going back to the original question, what is freedom of speech?

SWINSTEAD: Freedom of speech - my original answer was my parents gave me a pretty fair idea of what you can say and get away with, and when you stepped out of line and they ran the show they knocked you over. So, I mean, I don't like that happening. I am tenacious, but I am a good mediator and a facilitator, and I will be trying to talk to people in government to lead them to understand how valuable a free and open press is. But look, it is a developing country with lots of problems and I am sympathetic to them and I am not angry about censorship or anything else. That's life.

Fiji Village.com picked up on this interview and presented it as Swinstead “clearing the air” on Fiji. The radio station’s website said he would “keep the channels of communication open” with the regime. Fiji Village is part of the Communications Fiji group, which is another key media group with a powerful Gujerati business stake (Hari Punja) along with The Fiji Times (Motibhai) and the Fiji Sun (C. J. Patel).

Good luck to the new team at The Fiji Times. They’ll need it. At least Fiji will still be blessed with a choice of daily newspapers. The third daily – the Daily Post, with a substantial indigenous Fijian shareholding, is already a casualty of the censorship climate and struggling economy.

The poorly led Fiji military, beyond any doubt, has clearly destroyed their own nation. It doesn't get much worse than that.

Heard your comments about Fiji on National Radio. It was a very unbiased and relevant reflection on events in Fiji.