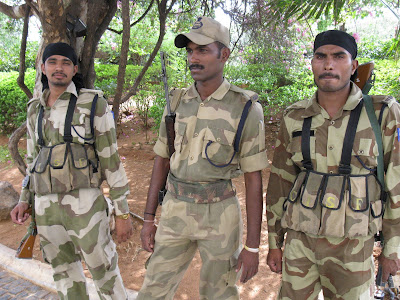 Indian troops guard the entrance to the AMIC media and globalisation conference in Hyderabad, India. Below: Assaults on the media in India featured on CBS-IBN. Photos: David Robie

BARELY had Café Pacific returned to its more tranquil Waitemata waters after the stimulating AMIC media and globalisation conference in Hyderabad, India, than Reporters Sans Frontières has issued another communique about a shocking development on the subcontinent. RSF reports that it is

... appalled to learn that the niece of a journalist based in Bulandshahr, in the northeastern state of Uttar Pradesh, was kidnapped for three days and raped by gang members, who mistook her for his daughter.

The police have arrested a member of the gang, which had reportedly threatened the journalist over his reporting and wanted to deter him from testifying in a murder case. The journalist, who reports for a TV news channel and edits a monthly called Jungsatta, has been identified only by the name of "Rizwan".

"We express our full support for Rizwan, his niece and his family," Reporters Sans Frontières said. "This barbaric violence must not go unpunished. In his reporting and the evidence he gave to the judicial authorities, he courageously fulfilled his journalistic and civic duties. The Indian authorities must now do their duty by bringing this wretched crime's perpetrators and instigators to justice and by providing the journalist and his family with effective protection."

The press freedom organisation added: "If the authorities take no measures to punish those responsible, other journalists will be afraid to continue covering criminal cases or any story remotely linked to the underworld and organised crime."

Yasin Bhatola, a known member of a Bulandshahr-based gang led by Mehboob Pandey, was arrested in New Delhi on July 1 on information provided by the Bulandshahr police. Police say Bhatola has admitted to being a member of Pandey's gang.

The Times of India quoted deputy police commissioner Arun Kampani as saying: "[Rizwan] was a witness in double murder case (. . .) in which Mehboob Pandey was an accused. Pandey and his associates threatened him with dire consequences if he continued to testify."

The abduction and rape was allegedly carried out by Pandey, Bhatola and three other members of Pandey's gang. Rizwan's family is reportedly now being protected by the Bulandshahr police.

The news of the Uttar Pradesh case has emerged just three weeks after Jyotirmoy Dey, an investigative reporter for the newspaper MidDay who specialised in covering organised crime, was gunned down by three men on 11 June in Mumbai.

This assassination was featured in the last report on Café Pacific.

Dey was the second journalist to be killed this year in India. The first was Umesh Rajput, a reporter for the newspaper Nai Duniya, who was gunned down by two masked men on a motorcycle in the east-central state of Chhattisgarh on January 23. 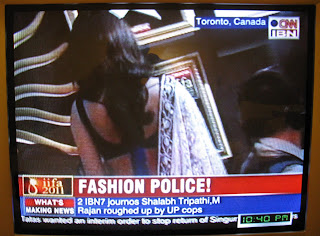 Reporters Sans Frontières released a report on February 24 about global organised crime and the fact that it now poses one of the biggest threats to media freedom.

These events, of course, put things in perspective in the South Pacific where media freedom is a catchcry but where the risks are relatively mild in the global stakes apart from the occasional roughing up, such as in Vanuatu, and unsavoury state censorship, as in Fiji. (Incidentally, Café Pacific deplores the appalling non-sentence handed out to minister Harry Iauko for the recent assault on Daily Post publisher Marc Neil-Jones). It only takes a brief trip to India, Pakistan, Philippines - or across the border from Papua New Guinea into Indonesian-ruled West Papua - to get a rude awakening on the realities over media freedom.

Meanwhile, the global credibility of news media has taken a king hit with the closure of the 168-year-old News of the World amid the newspaper's phone hacking and alleged police corruption furore that is shaking the Murdoch media empire to its foundations. Café Pacific regards the collapse to the world's biggest selling Sunday as no real loss - it was a scurrilous rag anyway. But the ramifactions from this scandal for professional and ethical media globally is likely to be dire.

The British government insists that media self-regulation itself has "failed". Many other governments are bound to share that sentiment and use the NOTW debacle as an excuse for harsher media laws.

For those in the Pacific, it is sobering to reflect on the performance of another (then and albeit tiny) Murdoch paper, The Fiji Times, during the Coalition Labour government's one year in office in Fiji after a landslide election win in 1999 and the George Speight coup in May 2000. Allegations of bias and lack of professionalism were rife at the time and much has been written since.
Posted by café pacific at 1:03 AM