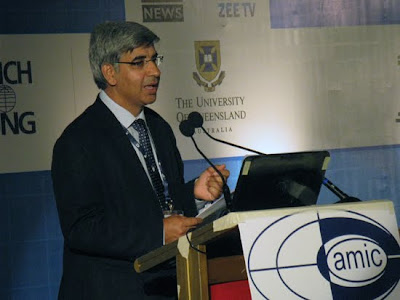 ONE of the highlights of last month’s AMIC conference in Hyderabad, India, was a presentation about the US/UK news “duopoly” and the distortions and “injustices of information flows”. Presented by professor Daya Thussu of Westminster University, a former editor of Gemini News Service - one of the post-war pioneers of “independent news” - it was a compelling session. Thussu regards the rise of Al Jazeera English as a critical factor in creating a “news contra flow” to challenge the Western prism. “It was important to have the independent perspective on the Libyan civil war provided by Al Jazeera,” he said. “There is a global battle for images and ideas and Al Jazeera is an important counter to the BBC/CNN global news duopoly."

Undoubtedly, foreign policy has been enormously affected by WikiLeaks – “the greatest leaks in history”, he argues. And the information guerrillas are playing an important role too, in spite of the celebrated “Gay girl in Damascus” blog being exposed as a hoax, and blogger Amina Arraf being unmasked as a man - 40-year-old American student activist Tom MacMaster.

The four-day 20th Asian Media Information and Communication Centre (AMIC) conference, with more than 400 participants and presenters, was a stimulating event, even if understandably very heavily focused on the host nation India. The “Pacific” contingent may have been tiny (just four from Australia, New Zealand and Papua New Guinea), but the team profiled well.

Associate professor Martin Hadlow of the University of Queensland and the Pacific’s representative at the UNESCO World Freedom Day event in New York in May, following his valiant efforts at getting last year’s UNESCO event staged in Brisbane last year, provided a global overview of development communication with a focus on the Pacific. He described how the Pacific, while being relatively underdeveloped in ICTs, had actually stolen a march over many developing countries with an innovative and rapid take up of mobile phones. He also talked about the region’s “heritage media” and radio was “still very much king” in the Pacific. He outlined the success of some new players like New Dawn FM in Bougainville, last year’s winners of a global communication and social change award sponsored by UOQ. 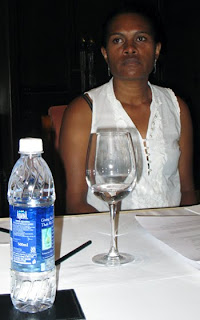 Papua New Guinea’s Joys Eggins, daughter of leading former EM TV journalist John Eggins and now doing her master’s degree at the University of Goroka, spoke about the Komunity Tok Piksa community video project in the Highlands. She outlined its success in producing visual messages on HIV/AIDS with local communities – “the dilemmas of collaboration, consent and ownership”.

Unitec’s Munawwar Naqvi’s paper presented a critical perspective on communication with communities within development efforts at the grassroots level in central India. Two models, selective interaction and new involvement, were developed from the data collected from semi-structured interviews of different types of non-governmental development organisations.

Next year’s AMIC conference will be in Malaysia and organisers already have the Malaysian Tourism Board lined up as one of the key sponsors. Café Pacific hopes to be represented. 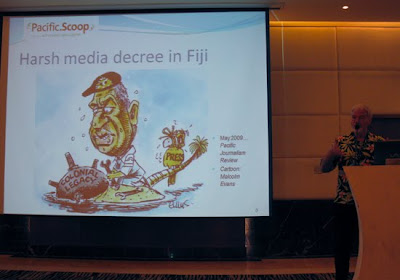