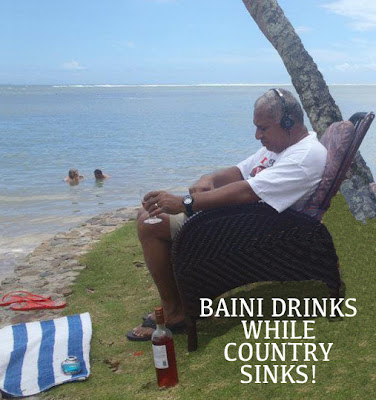 A PICTURE, as Coup 4.5 says, citing the old adage, paints a thousand words. But in this case, it’s more like a thousand laughs. As if anything was genuine about this image – another death by a thousand pixels with Photoshop is more like it. Just look at the floating coconut tree and absence of shadow and the cross-hatched grass for a start … What is astonishing, too, is the gullible level of readers – 41 apparently taking this image at face value at the last web count. No wonder we are lost in a fog of propaganda over this coup. This was Coup 4.5’s justification under the headline: Fiji's self-appointed PM naps at the beach:

No idea where the picture was taken or what the occasion was - or even if there was one. But as they say, a picture paints a thousand words. We leave it to readers to draw their own conclusion. The picture ... and the caption .... has been printed as it was sent to Coupfourpointfive.