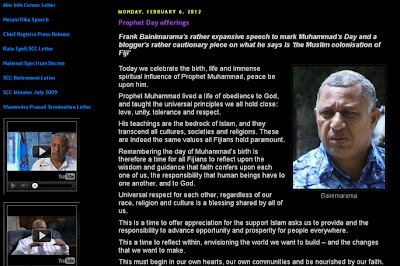 NOT SO VEILED RACISM

MOST countries have laws that prevent religious and racial vilification. Most responsible media outlets – including those on the internet – excise comments designed to inflame religious and racial hatred. But sadly not the most prominent of the websites set up to oppose the government of Fiji’s prime minister, Frank Bainimarama.

That site calls itself Coup Four and a Half – otherwise known as 4.5 – and is supposedly run by journalists. Its name denotes the four coups in Fiji’s post independence history -the two Rabuka coups in 1987, the Speight coup in 2000, the Bainimarama coup in 2006 plus what 4.5 regards as the half coup when Bainimarama’s takeover was declared illegal by the courts in 2009 and he abrogated the constitution altogether, sacked the judiciary and continued to govern by decree.

Now, Coup 4.5 is entitled to oppose the dictatorship, though many Fijians prefer it to the nationalist government Bainimarama overthrew. It’s also entitled to campaign for the restoration of democracy, though many Fijians are happy to accept the regime’s promise to hold elections in 2014. But there’s plenty wrong with 4.5 – unforgivably so – when it publishes the most vile attacks on people based on race and religious affiliation.

Grubsheet has taken the site to task before for publishing comments describing Indo-Fijians as “mongoose” or “mynahs” – the clear implication being that Fijians of Indian descent are imported pests. It regularly refers to the prime minister as “the Baini”, a disparaging play on words on the popular Hindi description of a person of low breeding or class. But now comes something far more grave, an all out attack on Fiji’s Muslims on one of the holiest days of the Islamic calendar – the birthday of the prophet Mohammed.

This wasn’t in the comments section of the site but in the main editorial column. And it deserves to be read in full, not only to appreciate the appalling nature of the attack itself but to appreciate why the Bainimarama regime is so determined to stamp out this kind of racial and religious intolerance in Fiji once and for all:

Fiji is going through a false scenario of reforms and modernisation to have a new Fiji. This was reiterated by the PM in his address during the November 2012 budget. Sadly it is bound to end up with civilization with darkness.The truth is Muslims, through Aiyaz Sayed-Kaiyum, is [sic] colonising Fiji. They are deceiving the people of Fiji using nice phrases and words such as modernisation, a new Fiji without corruption, transparency, fairness to justify their staying in power. Look at what has been happening:Wake up Fiji. Wake up to the radical changes in our beloved peaceful and friendly country. Regrettably, Banimarama will not do anything: only he knows why it is, 'Yes sir, three bags full sir!'

[Image of the hate figure Aiyaz Sayed-Khaiyum inserted by Coup 4.5.]

This grubby little offering isn’t just inflammatory but utterly false. Muslims constitute just 7 percent of the population of Fiji – some 54,000 in a country of 860,000. They are hardly “colonising Fiji”, as the anonymous author of this rubbish asserts. There is one Muslim cabinet minister – Attorney-General Aiyaz Sayed-Kaiyum – and one Muslim officer – Brigadier-General Mohammed Aziz – in the RFMF, the Republic of Fiji Military Forces. These are hardly “Muslims riding hard to power”. In fact, they’re total exceptions in their own fields in a population utterly dominated by Christians and Hindus. So the notion that they pose any “threat” is risible.

There’s also a puzzling reference to the “recruitment of non-Fijians, especially kaivalagis, to weaken Fijian’s capabilities”. Kaivalagi is the indigenous term for a white man or European. On the latest figures available, a mere 0.4 percent of Fiji’s population describes itself as European, under 3000 people in a population of 860,000. Perhaps the author was referring to the recruitment of American PR people or the odd expatriate lawyer. But this is clearly even more of a furphy than the claim about Muslims.

Simply put, Coup 4.5 – with this base offering – has become the local equivalent of a Nazi hate sheet. It’s designed to provoke and exploit the long-standing and deep-rooted fears of uneducated indigenous Fijians and turn them against Muslims in particular and Indo-Fijians in general. And it does that in the crudest way possible – to spread the lie that indigenous people are being marginalised in the land of their birth and robbed of their jobs and land.

There is also the implicit message that Fijians could be forced to abandon Christianity and live under the diktat of an Islamic state. How? Because Coup 4.5 positioned this vile piece of misinformation right next to the text of a routine message from the Prime Minister to Fiji’s Muslims to mark Mohammed’s birthday. The contents of this were totally inoffensive – indeed, sentiments universally shared of unity and tolerance. Yet it’s hard to escape the conclusion that Bainimarama’s adoption of the Muslim customary greeting, "Peace be upon him”, when referring to the Prophet, was being exploited to carry a deeper message of a leader dancing to the tune of both the Muslim religion and his Muslim right hand man, Khaiyum.

Or as the “article” put it – “Yes, sir. Three bags full, sir!” Presumably no “no sir’ – as the nursery rhyme usually goes – because, in 4.5′s view, Bainimarama never says no to his attorney-general.

Who are these people? Well, they’re always anonymous but are said to be a group of Fiji journalists running their site out of Auckland, with contributions from members of the deposed SDL government, ex civil servants and a hard core of anti-regime “human rights” advocates. One thing is certain. As well as permitting overtly racist content on the site, they routinely censor any comments they don’t agree with – unbridled hypocrisy from a site that continually castigates the regime for its own censorship of the media.

The wonder is that some of 4.5′s content is written by respected journalists and academics who are Indo-Fijians to boot. There are contributions from the Oxford-based Victor Lal – arguably Fiji’s finest investigative journalist – and from the economist Professor Wadan Narsey, currently working in Japan after falling out with his superiors at the University of the South Pacific.

Grubsheet recently asked Professor Narsey how he could possibly have anything to do with a website that carried overtly racist content. His response was that he’d been told by the “journalists” at 4.5 that it was preferable to allow people to “let off steam than have them bottle it up”.

How any responsible person can accept such a notion is frankly beyond Grubsheet’s ken. This is bottled venom that would bring prosecution in New Zealand – the country from which Coup 4.5 supposedly operates – and, for that matter, in all of the bolt holes of the disaffected Fijian diaspora. Imagine the furor if any Muslim in Fiji had launched a similar attack on local Christians, and on Christmas Day? It’s inexcusable and unacceptable. No buts.

An abbreviated version of this article has subsequently appeared in the Fiji Sun.

SEQUEL: Predictably, the Coup 4.5 article has triggered a wave of anti-Muslim sentiment in the comment sections of the blog, along with a series of personal attacks on Grubsheet for having the temerity to criticise the piece.

Here’s a sample that has all the hallmarks of fascist propaganda – the bigger the lie the more believable, for those inclined to believe in the first place.

While the followers of Islam seek to control the country- through subtle infiltration into the senior executive management of Fiji’s leading corporations and conglomerate companies- they will not be too pleased to discover that the religion they so vehemently follow with extreme devoutness – is, in fact, a sham.

There is increasing archaeological and documentary evidence being discovered which clearly shows that Islam was developed by the Vatican for the sole purpose of eliminating Jews. While many may be shocked by this revelation- there are a group of people who are privy to the authenticity of this fact- in fact, they may even hold key evidence and documentation which exposes Islam as a false religion- and an offshoot of the Roman Catholic faith.

Another made accusations of child abuse.

Coup 4.5 could excise this but won’t, even as it censors political comments that don’t suit its agenda. In other parts of the world, accusing the Prophet of child abuse and claiming Islam is a construct of the Vatican to eliminate the Jews carries the potential to spark rioting, fatwas, even Jihad. Yet at Coup 4.5, it’s all a legitimate part of the debate. The politics of hate.

Fiji-born Graham Davis is an award-winning Australian journalist who has reported widely from around the world. He blogs at Grubsheet. 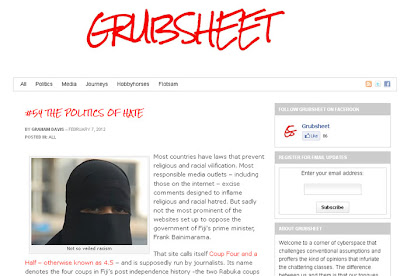