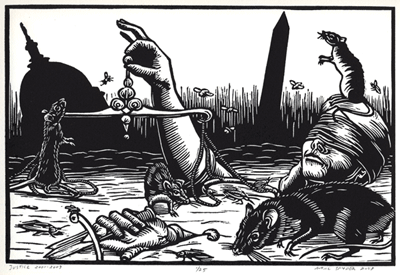 Cartoon by Marc Snyder - thanks to Fiji Island Mermaid Press.

By Eduardo Reyes in the Law Society Gazette

A SECRET fact-finding mission to Fiji has concluded that the rule of law "no longer operates" in the country. The independence of the judiciary "cannot be relied upon" and "there is no freedom of expression", council member and Law Society Charity chair Nigel Dodds reports in Fiji: The Rule of Law Lost.

Dodds visited Fiji on a tourist visa in late 2011. Following the 2006 coup by Voreqe Bainimarama, ruled illegal by its court of appeal in 2009, Fiji is ruled by decree through emergency measures renewed every 30 days. Fiji (pop. 850,000 people) is currently suspended from the Commonwealth.

The report claims that Fiji’s Attorney-General, Aiyaz Sayed-Khaiyum, has been central to ending the rule of law by limiting the power of the courts and ending the independence of legal sector regulation. Fiji’s late President, Ratu Josefa Iloilo, revoked all judicial appointments in 2009. Dodds’ report reveals the extent to which the government depends on the appointment of judges and senior law officers from Sri Lanka on short-term contracts.

Chancery Lane’s human rights adviser, Courtenay Barklem, notes: "Judges have to have security of tenure. We don’t know how these judges are being selected."

The 2009 Administration of Justice Decree removed the jurisdiction of the court to hear or determine a challenge to any government action. This has now been supplemented with a practice direction, seen by Dodds, pinned to the walls of the courts, noting that the Chief Registrar will terminate any such case that slips through the net.

Dodds told the Gazette: "I found a significant number of lawyers endeavouring to do the best for their clients in intolerable circumstances. They deserve tremendous credit."

Dodds’ subterfuge was deemed necessary following the refusal of the Fiji government to admit an International Bar Association delegation to the country in 2009. He funded the trip personally.

Fiji’s High Commission did not provide a comment on the report in the time available.