And now - a public apology to Ahmed Zaoui? 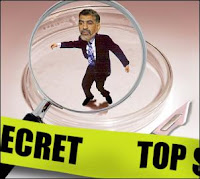 Finally, some sense in Godzone amidst the "war on terror" madness. After persecuting Ahmed Zaoui and making a mockery of New Zealand's supposed commitment to human rights, the so-called "risk security certificate" against him has been officially withdrawn. Amnesty International (and others) has welcomed the decision announced by the Director of Security to withdraw the certificate against the Algerian refugee, who has long been a cause celebre for many of us. He has even been an occasional, and charming, guest lecturer for student journos at AUT's j school. And what a breath of fresh air in these paranoid times. This decision makes it clear that a substantial threat to New Zealand's security must exist before the human right to asylum from persecution is ignored.
The decision comes almost five years after Ahmed Zaoui arrived in New Zealand and four years after the Refugee Status Appeals Authority concluded that he should be granted asylum following his experiences in Algeria and in exile. Says Amnesty International's executive director in NZ:
The Ahmed Zaoui case has highlighted the fragility of our commitment as a country to basic human rights. Too many New Zealanders, including members of Parliament who should be more aware than most of the importance of human rights, were content to ignore the August 2003 decision of the Refugee Status Appeals Authority and condemn Mr Zaoui without access to the facts.
Too many were prepared to make cheap jibes about how a survivor of torture who had been in enforced exile for a decade and kept for 10 months in solitary confinement in a New Zealand prison was "abusing New Zealand hospitality", "costing the taxpayers too much", and was "free to jump on a plane at any time". Mr Zaoui's counsel has had to fight summary justice all the way.
An apology is now due to Ahmed Zaoui for New Zealand's poor handling of his case. And his family should be able to join him at the earliest opportunity, as called for by UNHCR. As Selwyn Manning said on KiwiFM, the five-year struggle for justice for Ahmed Zaoui as a refugee revealed the ugly side of NZ.