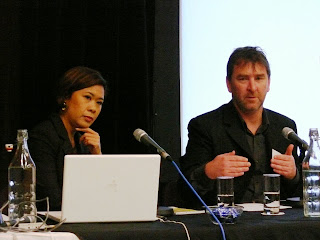 Nightly catching up on the al Jazeera English perspective on world events is so refreshing, especially after the mundane stuff being served up on Television NZ and TV3. So it was a cool experience for those of us who had the chance to share with four feisty Asia-Pacific woman journos this week, especially al-Jazeera's pair, Kuala Lumpur-based presenter Veronica Pedrosa and Trish Carter (actually now exAJ). Trish talked about the immense challenges about starting the Asia-Pacific bureau of the Qatar-based satellite channel from scratch. Veronica, daughter of a famous exiled mum who fell out with Imelda Marcos over a no-holds-barred book about the totalitarian era first lady, gave a superbly entertaining and insightful look behind the scenes at al Jazeera. There is a determined commitment by its dedicated staff to report the many under-reported stories ignored by other media. Veronica describes herself as a "global citizen - Filipina by heart, Euro by habit"! The quartet were rounded off by Sagarika Ghose from India and Charlotte Glennie, dumped by TVNZ and NZ's only Asian resident television correspondent, and now based in Beijing for the ABC in Oz. Thanks to Charles Mabbett and the Asia:NZ Foundation, many journos and a sprinkling of j-students from AUT University got the chance to be inspired by their experiences and insights. But what happened to the 40-odd journos who signed up for the seminar but were no-shows? No wonder NZ media is so depressingly parochial and smug. Pictured: Veronica Pedrosa and Russell Brown. Photo: Jomine Neethling (AUT Journalism - Pacific Media Centre)