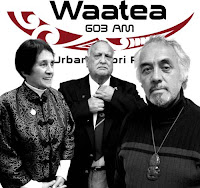 Syd Jackson, one of Aotearoa/New Zealand's leading political activists and Radio Waatea's Liberation Talkback host, has died after four decades of campaigning against injustice. Maori Party co-leaders Dr Pita Sharples and Tariana Turia delivered this poroporoaki:
Tariana Turia: A true agent of transformation has left us. Syd has lived his life with a totally unswerving commitment to revolution.
Some forty years ago in 1968, it was Syd, the son of the 1937 All Black and Māori Battalion veteran Everard Jackson, who challenged the Federation of New Zealand Māori Students that All Black tours to South Africa should be opposed as a stand against apartheid.
His leadership of Ngā Tamatoa in the 1970s, and their staunch advocacy of Brown Power, laid the foundation for a dynamic period of Māori renaissance. Syd Jackson was the former president of the Auckland Maori Students Union and activist group Nga Tamatoa.
Pita Sharples: We think of the inspiration of Syd in firmly placing Te Tiriti o Waitangi on the political agenda in all spheres. He spearheaded the drive for learning te reo Māori, bringing social awareness to the marginalisation of Māori in New Zealand while at the same time being such a proud advocate of tino rangatiratanga.
Syd has made an enormous political impact on Aotearoa, particularly through his role in the union movement. He had the keen intellect to grasp complex issues, a quality which you would see coming through in campaigns such as encouraging Libya to boycott trade with New Zealand, or protesting against APEC.
In more recent years, he brought that same passion and zeal to the health movement, establishing Turuki Healthcare as a pioneering organisation to deliver affordable and accessible healthcare for the people of South Auckland.
Syd Jackson was also chairperson of Te Kupenga o Hoturoa - the first Māori sponsored PHO; and a director of Te Roopu Huihuinga Hauora.
Turia: The tragic irony is that right up until the end, Syd pursued his crusade against cancer not just for his own powerful determination to live but also to argue for the rights for all Māori cancer sufferers.
Syd will be very, very sadly missed. His Liberation Talkback radioshow gave us all heart to act, to take a stand, to look after our people.
Our love and compassion goes to his darling Deirdre, the Jackson whānau, Ngāti Kahunungu and Ngāti Porou who have shared a remarkable man with us - a man who truly dedicated his life to staying true to the kaupapa, to tino rangatiratanga. His legacy has been and will continue to be profound.
Pictured: Titewhai Harawira, Mangere kura kaupapa school principal Jim Perry and Syd Jackson
Posted by café pacific at 4:43 PM