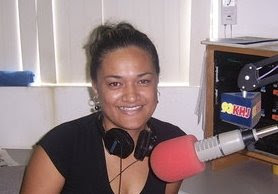 IT wasn't so long ago that Malia Sio was lamenting on her recent blog over the apparent "demise" of Pacific journos, especially from her Aotearoa viewpoint after swapping her radio work and on the Samoa Observer plus the Tribune for a NZ j-course. She noted that only two other Pasifika students out of a programme of 25 were with her doing journalism at the revamped Whitireia course. But actually, this is better than most in NZ. (AUT has 54 media students but that's out of a programme with a total of 800 plus students. The good news though is that AUT now has a dedicated Pacific journo course on the books - the first in NZ for 17 years!) Malia has also had a crack at the lack of understanding and respect by some NZ media of the use of matai and other Pacific chiefly titles. For example, Pacific Island Affairs Minister Luamanuvao Winnie Laban would correctly be addressed as Luamanuvao throughout a news story after the first instance when the full name is given. Prominent journalist Taualeo'o Stephen Stehlin (Tagata Pasifika) is another example - but his chiefly title is rarely given the respect it deserves in the media. The price of being a journo? But in these days of muddled name styles, many papers that usually dispense with honorifics, also ditch titles - regardless of whether they're Pasifika or palagi.