ALL power to Warkworth's Tabs Korauaba and his Tuvaluan partner, who have launched a new pan-Pacific paper this week. Café Pacific hopes the monthly Pacific Community News succeeds where other ventures have failed. Tabs, originally a broadcast journalist from Kiribati, got his print creds the hard way - by publishing Tematairiki and Rodney Today. Both went under. The reason? No team, no mission, no funding, he admits. But Tabs reckons he has now absorbed the tough lessons from the two previous publications. Third time lucky?

It is a highly competitive market. It's also hard to judge a readership across s 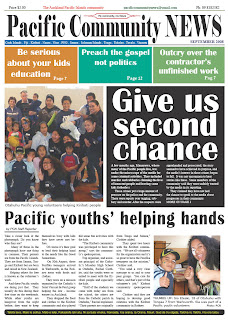 everal distinct Pasifika communities. The Samoa Observer is making big inroads into Auckland and now has its own Auckland Pacific Today publishing on Fridays. However, this time Tabs does have a team and a clear business goal. He has teamed up with a successful businessman who will handle accounts, marketing and advertising while Tabs looks after the editorial side. He also has a couple of English first-language speakers to do the proof-reading. He says:

Some pan-Pacific papers have been launched before and they went under. I think the problem was that they didn't have enough planning, didn't have a committed team, were impatient and, of course, they didn't have enough advertising. But that's in the past. This is today. I always remind myself that being a publisher means not dwelling on the past so that it doesn't control the future. We talked with some businesses and they liked our positive vision so they came on board. And after six months ads will really start to roll.
Asked about Samoan journalist Malia Sio's "breaking away or breaking in?" comments about Pacific vs mainstream media on her blog, Tabs says:
That's her view. But I am not very keen on 'talking' - I am a doer and I always experiment on new things. But she musn't worry, because we're not going to hide bad stories about Pacific Islanders. We'll let the community talk about its own problems and its own solutions. Reporting about crimes and negative stuff are not helping at all. Successful people achieve their potential because they are positive throughout their lives.
Right on, Tabs. Go for it!
Posted by café pacific at 11:37 PM

I think my views expressed in breaking away or breaking in have not been fully taken in.
It's very encouraging to see more Pacific papers/ media outlets being set up to strike a balance media reporting of Pasifika people.
I'm not pushing for publicity of negative stories at all/ problems with the community.
I'm pushing for more every day Pasifika stories in mainstream media and more Pasikika faces in mainstream media rooms.
Malo lava and best wishes for the latest Pasifika community paper.