IT'S countdown time again for the PIMA fono at AUT - this year's theme is "Pac2theFuture"! Aaron Taouma, Chris Lakatani and team are planning a big day with artists and the new media as well as a shakedown on life in the mainstream for Pasifika journos. Dawn Raid, King Kapisi and Onesian are in the frame. Great stuff. It's being planned for the AUT conference centre on October 10 with networking drinks after all the raves. More info over at PIMA's new look website and Google group. And watch for the AUT student journos on the scene, and John Pulu with BCS2 mates who are planning a video effort.

Last week's Media Diversity Forum, organised by the Human Rights Commission and the Pacific Media Centre on the Nga Wai o Horotiu marae (AUT), was a success with the highlights being Tagata Pasifika's Taualeo'o Stephen Stehlin and Asia Downunder's Bharat Jamnadas. Not too many palagi mainstream media movers, but plenty of Pasifika shakers ... and a host of brown students! None of the eight tenured palagi journalism staff from AUT were there - all "too busy" to get a fresh view outside the square. If j-schools can't set the pace, then what hope is there for changes out there in mahogany row? Fiji-born Jamnadas regaled the audience with amusing anecdotes of resistance in mainstream TV because of his "accent" and experiences, but gave an insightful account of the progress of a programme that leaves TV3's Sunrise, for example, for dead. His experiences echoed those of many Pacific journalists who have migrated to NZ from the region with strong reputations but battle to even get a look in with monocultural newsrooms. (And his story was picked up as lead "highlights" item on AMIC's Alternative Media portal in Singapore. Scoop also linked to the PMC coverage).

Sometimes Pacific journos eventually get a break, like Rebecca Singh as weekend news anchor of TV3. She was the best news presenter on Fiji TV, and she's now the best on TV3 too, if only they would fully recognise it. Cafe Pacific reckons she should quit NZ and team up with Al Jazeera, the best Asia-Pacific news programme broadcast in this country (but only scheduled snippets on Triangle) by far! Sometimes the Pasifika expatriates head back again, like Fiji's best political reporter, Riyaz Sayed-Kaiyum, who ended up back in Suva as Radio Fiji's CEO after a stint with Asia Downunder. But this political appointment created a loss to the journalism cutting-edge. 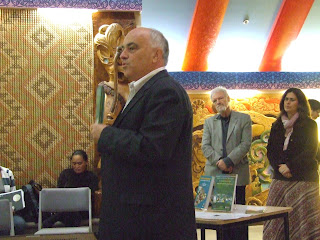 During the forum, a couple of new Pacific media books were launched by Race Relations Commissioner Joris de Bres - Media and Development (25 Pacific contributors) and South Pacific Islands Communication (15 contributors) were "courageous" publications, he said. What a contrast with the single so-called "Diversity" chapter in the recently revised edition of the JTO journalism textbook Intro - this is so underdone it isn't much use as a teaching resource. Incidentally, congratulations to Justin Latif (Western Leader) and Melissa Davies (TV3) who won runner-up prizes in the Whitireia diversity reporting award this week - both AUT graduates and they were among the AUT graduates and current students who made up half the award shortlist, far more than any other j-school. Picture: Alan Koon.