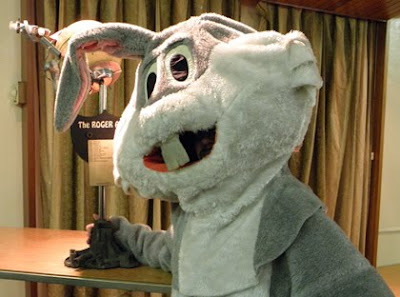 Horton’s first star billing for Auckland’s advocacy faithful was at the annual Roger Awards – the Oscars of the global transnational notorieties and their murky impact on the New Zealand economy and justice. Chief culprits for 2010:

1. The Hobbit affair trio – Warner Brothers (received by none other than Bugs Bunny and the third time a media corp

oration has won the “worst transnational” prize), with the John Key government collecting the Accomplice Award for “caving in” to the movie moguls and film director Sir Peter Jackson taking out a special Quisling Award for being the New Zealander who “did the most to facilitate foreign control” in the country.
2. British-owned BUPA "couldn't care less" retirement home company
3. Imperial Tobacco – for its “despicable” and “deceitful” third-party PR campaigns.

The film studio threatened to make The Hobbit in another country after Kiwi contract workers began collective agreement discussions and the corporation forced a controversial deal that kept the $670 million production in New Zealand. The government agreed to give the film studio an additional $20 million tax break and change the law so there would be no possibility that contract workers could go to court and claim employee rights.

According to the judges panel, headed by Banks Peninsula writer and researcher Dr Christine Dan and including a trade unionist, an associate professor and another senior academic and former Green Party MP Sue Bradford: Warner Brothers "significantly outscored all the other finalists in interference in New Zealand politics and governance. No other corporation has been given such a red carpet treatment when it came to interfere in the way we do things here ..."

The report went on to cite one of the judges saying “an overt display of bullying that humiliated every New Zealander, and deliberately set out to do that”.

The following night, Horton was again in action - this time kicking off his “NZ NOT for sale” campaign with a seminar speech at AUT University’s Pacific Media Centre. After a devastating critique of the Trans-Pacific Partnership Agreement (TPPA) and NZ’s shameful role in it, he prescribed a dose of"people power" as the remedy for the secret free trade deal “disease”:

Important as it is to lobby politicians and generally engage with that whole parliamentary process, that is a top down and essentially passive approach, asking our elected re 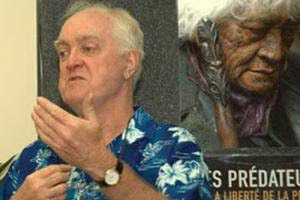 presentatives to actually represent us. You don’t need me to spell out the whole history of betrayal, sellouts, compromises, and flat out lying that has involved in the past. So it’s not enough to trust politicians to do it for us, or even rely on a change of government to make it all good. We have to do it for ourselves, we need some People Power in New Zealand.

We’ve seen it in spectacular action in the Arab world this year but they are very different societies. Within our country we have seen the most magnificent grassroots mobilisation and community action in response to the seemingly never ending earthquakes crisis in Christchurch. There we witnessed ordinary New Zealanders – students, farmers, women, workers, the unemployed, brown, white – take charge of things in their own streets, neighbourhoods, suburbs and city, rather than helplessly waiting for somebody else to do something about it. Just to single out one group – I speak as a student activist from decades ago, and one who was cynical about the calibre of “today’s young people”.

I stand in awe of the Student Volunteer Army which mobilised somewhere between 10,000 and 20,000 students to get stuck into the most basic of tasks, namely digging the city out from under the ocean of silt, and muck and shit that engulfed it. Now, what I’m talking about is an emergency response to a life and death catastrophe, and not what is commonly perceived to be a “political” issue. But there is nothing more political than spontaneously organising people at the grassroots level to take control of their own communities. New Zealanders care very deeply about their communities and our country, despite the best efforts of the ideologues to turn us into a dog eat dog society. That people power is a truly formidable force ....

We’re confronting the most powerful institutions in this country and in the world, but we’ve beaten them before and we’ll beat them again. They’re the ones who have to hide inside a fortress of secrecy and lies. We have nothing to hide and the truth is on our side. We are many and they are few.

Posted by café pacific at 1:32 AM No comments: