By James Thomas of Today Tonight

Billions of dollars in foreign aid going to PNG are being siphoned off by corrupt politicians and officials - and into Aussie companies.

The Australian property market, casinos, and the banks are playing host to millions of dollars in foreign aid allegedly being siphoned off by corrupt Papua New Guinea politicians and officials.

The money trail ends up in Australian companies, caught up in the multi-million dollar corruption ring.

Sam Koim, head of PNG's Anti-Corruption Task Force, is on a mission to lift the lid on billions of dollars of dirty money leaving PNG to be laundered in Australia.

About 59 people have already been charged with corruption offences in PNG, and it is alleged much of their illegally obtained money is spent in Cairns.

Koim says Australia contributes about $500 million to the PNG budget, and 40 percent of that budget is lost to corruption annually.

CAMPAIGNERS on board the West Papua Freedom Flotilla will ‘rot in jail’ if the Australian government doesn't help them if they get into trouble, says Aboriginal elder Kevin Buzzacott.

The objective is “to free our brothers and sisters up there with all the bad stuff that’s happening”, Buzzacott says in an exclusive audio interview on YouTube with the Pacific Media Centre's Daniel Drageset, reporting for Pacific Media Watch and Pacific Scoop.

The flotilla has gathered a range of pro-independence campaigners on the journey going from Lake Eyre in northern South Australia, via New South Wales and the Queensland coast, across the Torres Strait to Daru in Papua New Guinea and finally Merauke in West Papua, where the flotilla is scheduled to arrive early next month.

“We’ve given them this warning. Therefore, should they end up in prison as a result of breaching the law of Indonesia or Papua New Guinea we’ve got no obligation to give them consular support,” Carr said, according to news.com.au.

THIS is a sneak preview of a documentary about the Solomon Islands conflict that Larry Thomas from Fiji and I have been working on for years.

We started filming in early 2003, prior to the deployment of the Regional Assistance Mission to Solomon Islands (RAMSI). We went back and did more filming after the RAMSI intervention.

In filming, we travelled to Malaita, Western Solomons and around Guadalcanal.

NELSON MANDELA promised a South Africa based on freedom and equality. But as the country's former leader lies in hospital critically ill, the nation he fought to create is slowly disintegrating.

Violence is commonplace, unemployment is out of control and the ruling ANC government is accused of rampant corruption.

Next on Four Corners reporter Matthew Carney goes to South Africa to try and understand the forces that threaten to pull the "rainbow nation" apart. What he finds after nearly 20 years of ANC in government is a tiny black elite have enriched themselves at the expense of a poor black majority.

For the poor not much has changed... 18 million people live on less than $2 a day.

The Marikana mine massacre illuminates the massive contradictions and difficulties confronting the country. 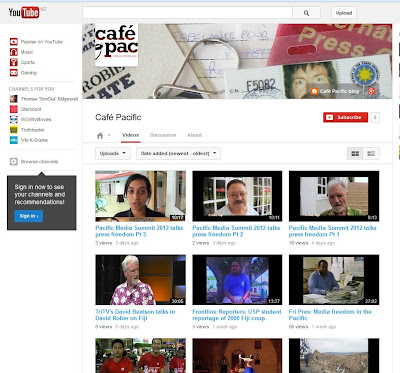 A NEW VIDEO channel has been opened by Café Pacific on YouTube with a variety of Pasifika media, human rights and environmental resources. Find it here.
Posted by café pacific at 5:08 PM No comments:

The Hungry Tide, one of the documentaries featured in Professor David Robie’s Suva paper on Pacific journalism’s own challenges of adaptation to environmental changes. Trailer: Ronin Films

By Sherita Sharma in Suva

At a symposium organised during the recent 12th Pacific Science Inter-Congress, Professor David Robie, based at the Auckland University of Technology and a former head of USP Journalism, talked about a variety of issues stemming from the challenge of environmental reporting in the Pacific.

Deliberative journalism is issues-based reporting, and looking at daily news as issues and not merely events.  In the Pacific context, reporting on environmental issues such as climate change have become more prevalent, with countries such as Kiribati and Tuvalu bearing the brunt of these global challenges.

Dr Robie was speaking at a parallel social sciences symposium entitled “Oceans and Islands: ‘Failed states’ and the environment in the Pacific”.

Read more »
Posted by café pacific at 4:35 PM No comments:

Behind The Shroud - Ahmed Zaoui case exposé finally on TV

BEHIND THE SHROUD: Tonight for the first time on New Zealand television the public will be told why and how the Security Intelligence Service (SIS) got the Ahmed Zaoui case so wrong. What can we learn from those mistakes?

Should the SIS, GCSB and our intelligence aparatus undergo significant reform? This documentary explains what the government refused to reveal.

Behind The Shroud reveals for the first time secret testimonies of witnesses who appeared before the Inspector-General of Intelligence and Security’s secret hearings into the Ahmed Zaoui case.

This testimony is highly relevant today as we all debate how we as New Zealanders can all take a role in resisting gross abuses against our civil liberties and the excessive use of the state’s intelligence agency powers.

Read more »
Posted by café pacific at 3:41 PM No comments:

Pacific conflict: Associate Professor Tarcisius Kabutaulaka, of the University of Hawai'i, and others speak about conflict and transition. How can conflict-affected countries break cycles of violence, low trust or weak institutions? A Praxis panel seminar series.

THE PNG Solution is in breach of international law. It doesn't serve the best interest of the asylum seekers it will affect.

And Australia's Department of Immigration and Citizenship is taking grossly insufficient responsibility for the safety and security of its detainees on Manus Island.

But the PNG Solution is just another in a long line of "border control" solutions which are in breach of legality and morality. There is nothing new about it.

Much has been made of PNG's poverty and gender-based violence, but even more disturbing is its military and police human rights record.

Evidence of abuses in the form of a military blockade, massacres, rape and torture during the Bougainville Crisis, the civil war that spanned the 1990s, are well-documented.